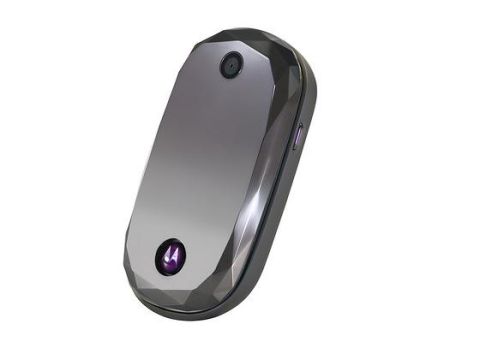 Besides its admittedly striking look, there's nothing new here and no real improvement on the original Motorola U9

Besides its admittedly striking look, there's nothing new here and no real improvement on the Motorola U9 (the MOTOJEWEL actually claims less battery life and smaller onboard memory). It's okay if you like the look, and don't get hung up on big spec numbers, but it would have been a lot better if it came with headphones.

Motorola's RAZR series showed that there's still a place for phone manufacturers who have slipped behind the innovation curve if they can make their phones distinctive and desirable enough, and so it is with this stylish little number, a variation on the slightly more macho looking U9 clamshell.

The MOTOJEWEL's name gives the inspiration away, though a quick glance will tell you all you need to know.

The bevelled edges on the shiny front imply a huge gemstone (huge by gemstone standards that is – at 90x49x16mm and 95g it's a very compact little clamshell).

To augment the 'ladies night' appeal it comes with a neat little leather-look clutch case which includes a make-up mirror plus pouches for credit card and lipstick.

Like its predecessor, there's a 1.4in, 262,000-colour OLED screen hidden behind the mirrored cover, which shimmers into life when you receive a call, and offers time, battery, signal and caller info, as well as the phone's music player (more on that later). Because its edges aren't clearly defined it appears to float within the casing, which admittedly looks pretty cool.

Flip the phone open and you're confronted with a deep purple coloured keypad.

Keys are well spaced and raised slightly so they're easy to find and press, plus there's a dedicated key to access the music player, which is decent enough, syncing with Microsoft Media Player 11 on your PC for easy swapping of tracks.

The 20MB of onboard memory won't hold many, but you can add up to 4GB via microSD card (not supplied).

The music player really comes into its own however when you play it with the flip closed. The hidden outer display leaps into life along with touch-sensitive keys for play, pause and skip.

Its' a shame then that the onboard speaker is tinny and compressed and, shockingly, it doesn't come with any headphones.

If you want to add a set, you'll need some that will fit a thin-style mini USB slot since there's no 3.5mm jack plug, though stereo Bluetooth means you could use a wireless pair.

The 2 megapixel camera is very basic with fixed focus and no flash, though it will deliver up to 8x digital zoom and a maximum resolution of 1200x1600 pixels.

There's a multi-shot function (four, six or eight shots) and a timer (five or ten seconds), plus a few post-pic editing options such as rotation, mirror images (horizontal and vertical), cropping, resizing and some tinting effects (B&W, sepia, negative, reddish, greenish and bluish).

The pics themselves aren't very vibrant in terms of colour and have a tendency to grain – if you're not photographing still objects in good light, it's hardly worth your while.

Video is a couple of notches further down on the quality ladder, as you might expect, offering a maximum of 176x144 pixels, and while the video blurs easily, there's at least the option of a 4x digital zoom.

The web browser is functional without being anything to shout about, and in any case, without a 3G connection it's unlikely you'll have the patience to spend much time using it.

Battery life isn't outstanding but not bad for a low-specced phone, and we got about three and a half days of moderate use out of it, including an hour or so of music playback.

Besides its admittedly striking look, there's nothing new here and no real improvement on the Motorola U9 (the MOTOJEWEL actually claims less battery life and smaller onboard memory).

It's okay if you like the look, and don't get hung up on big spec numbers, but it would have been a lot better if it came with headphones.