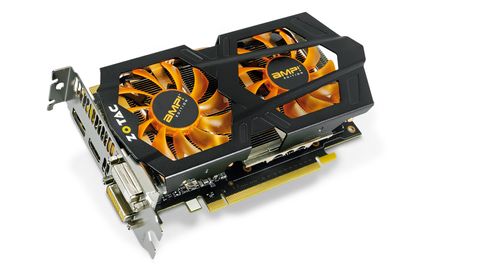 Nvidia graphics cards have recently become a lot like buses. You wait around for one for ages… then you're a little disappointed when it finally arrives and costs a lot more than you'd hoped.

The new bus looks all shiny and like a bit of a speed demon. But it will only get you to your destination at the same speed as the red bus that's been around for ages. Yay. Aren't analogies fun. Well, fun and a little obfuscating.

Anyway, enough of bus-related ridiculousness. This is another new Nvidia graphics card launch and, well, nothing's really changed, apart from the fact there's now a Nvidia card in the sub-£200 market offering similar speeds but with a slightly green hue.

The GTX 660 is the card I predicted would arrive around this time, as soon as the ill-fated GTX 660 Ti landed on my desk, then limped through my benchmark suite and lay wheezing on the lab floor. It's a repeat performance of the 400 series Fermi cards, where the GTX 465 turned up offering limited performance at a frankly pointless price point and the GTX 460 rode in like the cavalry to save the day for Nvidia.

Sadly though these are different times and the straight GTX 660 isn't going to save anyone, apart from die-hard Nvidia fans. That's not to say the GTX 660 is a particularly bad card. It's most definitely not and in no way as unpleasant-smelling as the Ti version. But it's just that we've had current-gen GPUs in this price-bracket, with this sort of performance, since the Pitcairn cards dropped below the £200 mark.

Thankfully, it's not just another hacked up GK104 GPU powering this mid-range Kepler graphics card, it's the brand new GK106 that's fizzing away at the heart of the GTX 660. Obviously, this is still built on the same Kepler technology, so it's got the same boost features and the low-power shenanigans of its big brothers, but what is this card missing exactly?

The GK106 GPU comes with a lop-sided five SMX modules in three General Processing Clusters (GPCs). They're the same SMX modules you've seen in all the Kepler cards so far, so that's 192 CUDA cores in each, making a total of 960 across the GPU.

Helping prop that up is the same 24 ROPs that came in the GTX 660 Ti, arranged in three blocks of eight between the GPCs and the L2 cache. That ROP count and same 192-bit memory bus helps keep the GTX 660 honest in comparison with the Ti version, and Nvidia has managed to close the gap even more by offering the standard GTX 660 with a higher clock speed. The stock version is set at 980MHz base clock with a 1,033MHz boost clock.

Despite the fact this isn't down as an AMP! edition, this Zotac card comes with a slightly higher clock speed: 993MHz and 1,059MHz respectively. This smaller GPU is also a little greener than the bigger cards in the Kepler family. At 2.5bn transistors it's packing in a billion less than the full-fat GK104 GPU and that means it's only just over 220mm2 in physical size.

Considering it's a brand new GPU iteration of the Kepler architecture, and a weaker one at that, it's really not that far behind the GTX 660 Ti. To be fair, we didn't expect it to be miles behind, looking at how closely this release matches the GTX 465 and GTX 460 launches of a few years back. But the fact that Nvidia has chopped off a full one billion transistors from the new GPU and only lost 384 CUDA cores, and only a few frames per second in most of our benchmark game titles is pretty impressive.

This smaller GPU ought to make it significantly cheaper to manufacture too. But then the consumer's top-end GK104 GPU is, in relation to the Fermi generation, more of a mainstream part. While the GK110 GPU is only being used in the K20 Tesla cards for the HPC crowd, its architecture is much more akin to the GF110 Fermi architecture that's found in the GTX 580 of the last generation.

That GK110 then is the top-end, silly-money GPU and the rest fall further down the stack. Obviously, we don't know exactly how much it costs Nvidia to create each chip, but we'd expect it to be making more of a margin on today's £400 cards with the smaller GPU than the last generation of £400 cards with their massive chips.

At this end of the market then the sub-£200 cards must be making Nvidia a fair chunk of cash with an even more simplified GPU at their heart. That's great business for the green company as this is the expected price point for these cards, though it could conceivably undercut the competition by quite a way if it chose to later on.

Considering the price cuts, the competition has made to its now-ageing Graphics Core Next cards, you could make a case that maybe Nvidia needs to start undercutting sooner rather than later.

When Nvidia was briefing us media types about the new cards - there's also a sub-£100 GTX 650 card, running on the GK107 GPU, hitting the shelves right about now too - it was talking about the GTX 660 being more than a match for the AMD HD 7850. At that card's price point it was an uneven contest with the Nvidia card proving more than a match for the Radeon card in nearly all our benchmarks. Granted, generally it was only in front by a short distance, but it was still a faster card.

AMD, though, has gotten rather aggressive with the pricing of its Pitcairn cards now and you can pick up the HD 7850 for as little as £137 at some retailers. That puts it around £50 cheaper than this Nvidia card and delivers some incredible performance figures for that money.

A consequence of the HD 7850's price drop means that you can also now pick up the AMD HD 7870 for £177, around the same price as the GTX 660. And in that comparison the Nvidia card doesn't come out looking quite as impressive.

Only the Heaven and Arkham City benchmarks have the GTX 660 with any sort of lead over the AMD HD 7870, and even then it's only shading it. When you look at the titles where the Radeon card takes the lead it does so by a long way.

The traditionally AMD-favouring DiRT Showdown runs twice as fast on the HD 7870 at the 2,560 x 1,600 resolution. The fact a sub-£200 card can hit 30fps with 4x AA and with all the Ultra-setting bells and whistles turned way past 11, and all at that eye-popping resolution, is honestly pretty mind-blowing.

To be fair the GTX 660 can do that in Batman: Arkham City, but the HD 7870 is still only 1fps behind it, making it a far more consistent gaming choice. We've also introduced Max Payne 3 as part of our benchmarking suite, at the request of Nvidia, and despite being a green-sponsored game it doesn't fare too well in the AMD comparison either.

There is the caveat that we can't make a true apples versus apples comparison because we haven't found a way to disable PhysX when using an Nvidia card. Inevitably, then, the GeForce card is going to be suffering a slight performance hit by having this enabled.

That said, the GTX 660 is giving performance figures almost a third slower than the HD 7870 with otherwise exactly the same settings. Take PhysX out of the equation and you can add a few extra frames to the Nvidia score, but not another 30 per cent to take it up to the AMD card's figures.

To that end then it just feels like this is all a little too late for Nvidia to be coming to this end of the market. It seems to have shot itself in the foot by taking this long to produce a sub- £200 card. If both AMD and Nvidia had released the cards competing here at the same time there's no way AMD could have kept up with Nvidia's pricing and still maintained any sort of margin.

Its Pitcairn GPU is a more complex beast than the GK106 and would've cost a lot more to make. The intervening months have allowed AMD to streamline its process, so it can now take the steps needed to slash the prices of these powerful cards.

If the GTX 660 had been released in March we'd have been hailing it as the second coming for PC gaming and the AMD card would have looked over-priced. With both the HD 7870 and GTX 660 coming in at the same price right now, the AMD card is the only one we'd recommend you spend your cash on.