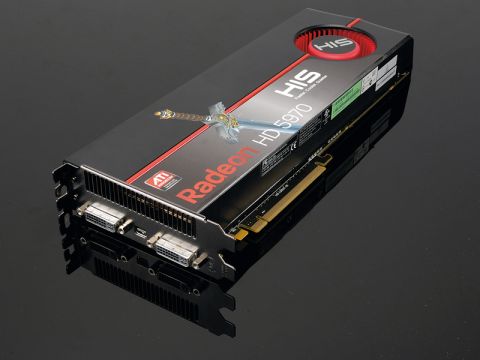 This card is quite simply too powerful for most modern desktops. If you are a hardcore gamer however, you might be tempted

Is the UK's Trident nuclear deterrent an outmoded Cold-War era irrelevancy? That's what the Lib Dem's Nick Clegg reckons and agreeing with Nick appears to be the nation's new fad. If that seems tangential to a graphics card review, hang in there. All will become clear.

For starters, there's a distinct whiff of weapons-grade overkill emanating from this monstrous dual-GPU card. Just like dropping nuclear bombs, it's hard to comprehend the problem for which the HIS Radeon HD 5970 provides the solution. Admittedly, in most tests of 3D-rendering prowess it's the fastest thing out there. Faster even than Nvidia's new DX11 beast, the chip known as Fermi. Problem is, it's not always the fastest and it's at its weakest when it counts most.

We speak of Crysis Warhead, which remains the most demanding test of graphics grunt yet conceived and the best looking game ever. The problem for the HIS Radeon HD 5970 is that it's becoming increasingly clear that running Crysis at really high resolution and detail settings demands a lot of graphics memory.

At this point you may be thinking that the 5970 has 2GB and therefore surely packs plenty of memory. But as with all dual-GPU boards, it's split down the middle between the two chips. That's an issue because each GPU must have a full copy of all the game data. In effect, therefore, this is a 1GB card.

Consequently, the wheels come off in Crysis at 2,560 x 1,600 and spectacularly so when anti-aliasing is enabled. If anything, the performance is even worse than you would expect. Dual-GPU graphics solution obviously don't like swapping data over the PCI Express.

Make no mistake, most of the time the HIS Radeon HD 5970 is astonishingly, sickeningly fast. How else can you describe a card that screams through the likes of Just Cause 2 at nearly 90 frames per second, even at full HD resolutions and with the anti-aliasing cranked up. The fact that it spews out such enormous frame rates without making much noise is pretty impressive, too.

Unlike PNY's GeForce GTX 295 the 5970 is the real DX11 deal. You get the hardware tessellator, the Compute Shader and generally plenty of future proofing in terms of feature support. If general purpose processing on GPUs ever takes off, it's likewise hard to imagine anything crunching numbers much faster than this 3,200-shader beast.

As dual-GPU boards go, the HIS Radeon HD 5970 is a corker. But there's no denying the fact that multi-GPU graphics solutions of all kinds are more sensitive to driver updates, games patches and the like. They're simply less reliable than single-GPU boards.

Unless you're in the habit of swapping out your graphics card and have a spare 5870 to hand, therefore, it's all to easy to constantly doubt your precious dual-GPU board is scaling correctly.

As if that weren't enough to put you off a card that clocks in above £500, there's the minor matter of memory. The vast majority of the time in most current games it's not an issue. But at this price point, we expect flawless performance not compromises, however occasional.

It's also worth remembering that this is a phycially massive and hugely power hungry card. The fact that Nvidia's new GeForce GTX 480 guzzles even more gas is little consolation.

Admittedly, few gamers have the capability to run at the sort of nose-bleed inducing resolutions that occasionally catch the HIS Radeon HD 5970 out. But we'd say those few are the very ones most likely to be unloading on high end graphics cards.

Despite the fact that this is usually the fastest card you can buy, it's therefore tough to recommend. Put it this way. Nick Clegg wouldn't buy this board. You do agree with Nick, don't you?