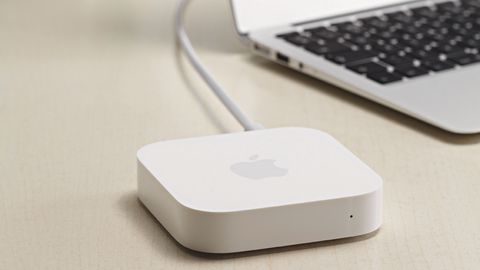 Sneaking out at WWDC, the junior member of Apple's AirPort range saw some significant and much-needed improvements. Indeed, it's now a much tougher choice between the AirPort Express and the bigger, more expensive, AirPort Extreme.

The first thing you'll notice is a new design. Apple has done away with the previous form factor, in favour of something resembling a white Apple TV, making the whole thing much more svelte and easier to place exactly where you need it.

The biggest improvement, though, is in the most fundamental part of any Wi-Fi base station: its radio. Previously, you had to use 802.11n on either the 2.4GHz or 5GHz frequency bands; but with the new AirPort Express, both bands are available simultaneously, so you should see better performance at both short and longer ranges with 802.11n devices.

In our tests, this was the biggest difference in performance between the old and new versions. While throughput was roughly equivalent at short range, as soon as we went into another room, the signal with the old Express would drop; with the new version, performance at distance was much better. This makes the Express a much better choice if you want to use it as your main Wi-Fi router in a smaller house, but as with the previous version it also excels if you want to use it to extend an existing network.

For covering a house without having multiple networks, this is a great option and AirPort Express is extremely easy to set up. AirPort Express now includes two Ethernet ports, letting you connect to both a broadband router and computer at the same time. However, these ports are still 10/100 Ethernet, rather than the significantly faster Gigabit Ethernet that's standard on most Macs.

Also included is an optical audio port, which means you can use the AirPort Express as a way to get audio from any AirTunes-capable device to your hi-fi setup.

The new AirPort Express is a significant upgrade, making it much more capable, and a better choice for more users.