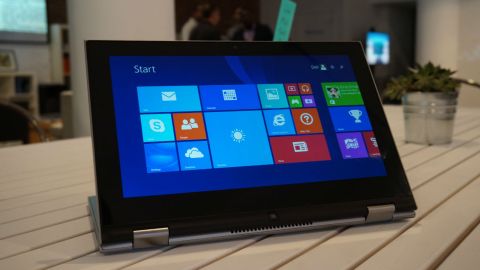 This hybrid laptop might be aimed at students, but at just under 500 big ones, would their money be better spent elsewhere?

With heavy hitter hybrids like the Microsoft Surface Pro 3 on the scene, it looks like Dell feels compelled to step up its game. The latest from the Round Rock, Texas firm is the Dell Inspiron 11 3000 Series, a rethink of the smallest model in its entry-level laptop line.

The idea behind the Inspiron 11 3000 isn't all that different, either: to offer a versatile computing device to students on a budget. Not to mention in a form factor that can at least try to make a bit more sense as a tablet.

Like competing convertible hybrid laptops, the Inspiron 11 3000 can fold its screen back 360 degrees to make for multiple use modes. (Stop me if you've heard this one before.) During a preview event in New York, I flipped the device into all the usual modes.

The sturdy dual hinge kept the same tension as I switched between laptop, tent (standing on its edges), display (standing on its keyboard face) and tablet modes. The use cases for these modes haven't changed all that much with Dell's take on the design.

Both tent and display (also known as "stand" or "presentation" mode) modes are ideal for viewing content, while the other two modes are rather self-explanatory. You've likely already made up your mind on which side of the fence you stand regarding these kind of devices. What matters is how the design makes them feel.

All of the laptop's ends are round and symmetrical, while its sides are flat. The only visible difference between the lid and base are their dimensions, with the base being thicker, naturally. The entire laptop is comprised of a plastic material in a silver hue, which gives it a slightly more premium feel than its asking price suggests.

However, the presence of the spill-resistant, membrane keyboard made the transition between modes awkward, as it didn't deactivate quickly enough and registered unintentional keystrokes. And without any rubber feet to keep steady in tent mode, the Inspiron slipped under my presses.

It's what's on the inside that counts

Powering the visuals behind that just-about-HD screen are either a dual-core or quad-core Intel Celeron processor (Haswell) with Intel HD Graphics. Supporting that chip are 4GB of DDR3 RAM, and there's a 500GB hard drive for storage.

Surprisingly, Dell managed to include 802.11ac Wi-Fi - a telling sign of the new wireless standard going mainstream - and Bluetooth 4.0. As for hard connections, the Inspiron 11 sports three USB ports (one 3.0), an HDMI port, an SD card slot and a headphone/mic jack.

Also on the outside is a 720p webcam with microphone for Skype and other video chat apps. Keeping all of those components running is a 3-cell, 43 Whr battery that Dell claims can last up to 8 hours (and 18 minutes, to be exact). Not too shabby for a laptop under 500 bucks.

While aimed at students, I have a hard time seeing exactly who the Dell Inspiron 11 3000 will serve best. Frankly, I find it difficult to work on screens smaller than 13 inches, especially at a 16:9 aspect ratio, and I generally don't find an improvised tablet all that useful or convenient.

Although this is aimed for the budget-buying crowd, even Dell puts out more affordable options, like the Dell Chromebook 11. Sure, that device doesn't offer multiple modes, a touch-friendly Windows 8 and gobs of storage. Regardless, it's where I would point the cash-strapped undergrad that's probably already knee-deep in Google services.

Thankfully, Dell has a near-identical 13-inch variant in the works for a September launch. But who knows, the Inspiron 11 3000 might grow on me when we get one in for a full review. If you already like what you see, you can pick one of these up when they hit Dell.com on June 19.