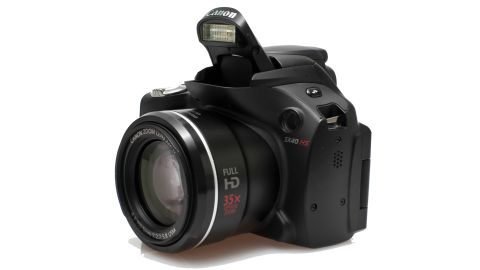 Canon introduced the SX40 in September, at the same time as the compact PowerShot S100. The SX40 is one of a new generation of Canon cameras to be equipped with the fast Digic 5 processor. Canon promises that this boosts the HS system and now also supports Full HD (1080p) video shooting.

On board the camera is a 35x zoom, making it the longest zoom lens on any Canon compact camera. In 35mm terms, that makes the zoom range from a wide angle 24mm, to an incredible 840mm - and all this is optical zoom, not digital.

The lens itself also features Ultrasonic and Voice Coil Motors, which allow for fast, and crucially for video recording, near silent zooming and focusing.

New intelligent IS technology has been included in the SX40. Capable of identifying the shooting situation and automatically applying the most appropriate image stabilisation settings, the camera comes equipped with seven different IS modes (which include panning and macro) that are automatically applied.

HS in the 'HS system' stands for high sensitivity, something which Canon has been working on improving for some time. The SX40 uses a back-illuminated 12.1 megapixel CMOS sensor, which is actually a reduction in pixel count from the SX30. Coupled with the new Digic 5 image processor, Canon claims that the camera is capable of delivering up to 75% less noise than the previous model - something which we were very keen to put to the test.

The Digic 5 processor also allows for high speed shooting, with the SX40 boasting an impressive 10.3fps shooting for up to 8 frames at a time while using the high-speed burst mode. These images are recorded in full resolution, making it particularly useful for shooting fast moving subjects.

In terms of design, there's little to distinguish this camera from the previous SX30. It's modelled after a mini DSLR, even including a faux lens release button at the bottom of the lens barrel.

Experienced photographers, or those potentially looking to expand their knowledge, will appreciate the full manual controls on offer from the SX40. Along with the fully automatic modes, you will also find Manual, Aperture Priority, Shutter Priority (Tv) and Program mode. The camera also comes with a variety of scene modes and creative filters.