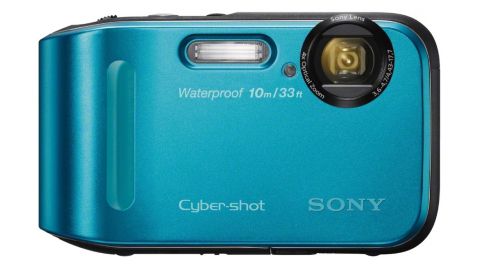 The Sony Cyber-Shot DSC-TF1 is rugged

Toughened cameras are great for giving you the freedom to shoot in extreme conditions, but their lurid looks don't always lend themselves to every occasion. Try whipping out your camouflage-coloured compact camera with its fake bolt heads at a wedding, for instance. Not cool.

Hence Sony has given us the Cyber-Shot DSC-TF1. It'll survive a 10m (33ft)-deep dunking in water, a drop from up to 1.5m (4.9ft) and will keep its cool down to -10C (14F). It's even dust-proof, too. Yet the Sony TF1 still manages to be one smartly styled snapper that'll look the part in any environment.

Internally the camera is fairly average among the action camera crowd, being based around a 16.1 megapixel CCD sensor equipped with Sony's Super HAD technology for improved light sensitivity with reduced image noise.

Fronting this is a 4x optical zoom lens with a 35mm-equivalent focal length range of 25-100mm. If this isn't enough then there's always a 5x digital zoom.

HD video recording is present of course, albeit at 720p resolution rather than full 1080p. Fast action can also be captured in burst shooting mode at a rate of 1fps.

When things get a bit frantic, optical image stabilisation helps tame camera shake, along with a decent maximum sensor sensitivity of ISO 3200 to freeze-frame action and shoot in low light.

Although extra features and effects aren't extensive, the TF1 does get Sony's useful Sweep Panorama mode, as well as face detection and 11 scene presets. For some added creativity a few processing filters are thrown in, including toy camera, selective colour and colour pop effects.

But aside from its restrained design, the Sony TF1's other trump card is price. At £159 / US$199.99 / AU$249 it comfortably undercuts the likes of the Panasonic FT5, Olympus TG-2 and Pentax WG-3 rugged cameras. But is this a case of cheap and cheerful, or cheap and nasty?

Plastic shrouds the entirety of the Sony TF1, with the edges subtly rubberised to increase grip. Aiding purchase is a generous rubberised front finger grip and a small rear thumb indentation. It all makes for an ergonomic feel, though the camera doesn't quite feel as solid as some rivals.

Controls are kept to a minimum, but thankfully they're all large and easy to operate. The grippy ridged surface of the zoom slider is great when underwater or wearing gloves, and there's a useful dedicated button to switch between stills shooting, panorama mode and video recording.

The tough camera's menu system is also simple yet effective, with a clear and intuitive layout. If you'd prefer it to be even more streamlined, then switching to Easy mode enlarges the interface and minimises options to the absolute essentials.

Dominating the rear panel is the Sony TF1's 2.7-inch ClearPhoto TFT screen. Its 460k-dot resolution is about average at this price point, and viewing angles aren't bad either.

Auto brightness helps adapt to different ambient lighting, though in bright sunlight the screen consistently gave a false impression that shots were overexposed.

Powering the Sony TF1 is a 630mAh Li-Ion rechargeable battery with a somewhat mediocre rated capacity of approximately 200 shots per charge. We came close to this, albeit with very little flash or video use.

Testing a tough camera is as much about scrutinising its ruggedness as picture quality, so we put the Sony TF1's toughness credentials to the test.

The camera sailed through a 1-2m dunking in the sea and survived a drop from around 1.5m.

However, it didn't pull through this unscathed. The drop caused part of the camera's top panel to pop apart and during testing both the screen and the lens fogged up internally for around two hours on a particularly hot day. Both issues were rectified, but it doesn't inspire complete confidence in the Sony TF1's toughness.

General performance is more impressive, though. A start-up time of about two seconds and spritely autofocus performance ensure this action camera can capture fast moving objects and activities, while the optical Steady Shot lens stabilisation does a good job of compensating for camera shake.

Image quality is typical of a small sensor camera in this price range. Detail is reasonable in close-up shots, but shoot a landscape and you'll see quite a bit of smearing of fine details, such as grass. Slight grain is also visible throughout the sensitivity range, but again this is a common trait of small sensor cameras.

Colour reproduction is much better though, as is white balance consistency and the well-controlled chromatic aberration (purple fringing).

In low light the Sony TF1's image quality doesn't throw up any nasty surprises. Annoying colour speckling is almost eliminated up to maximum ISO 1600 sensitivity and grain is well controlled up to ISO 800. However, the price you pay for this is aggressive noise reduction processing that starts to smear detail at ISO 400 and keeps on going as sensitivities increase.

But far more annoying is the abysmal lack of detail in panoramic shots. Considering how much Sony has promoted its Sweep Panorama system, the Sony TF1 just doesn't deliver results worthy of the hype.

For starters you're restricted to three fixed radiuses, so you can't just stop panning whenever you like. This is easily fixable with a quick crop, but you won't be able to do much about the hideous loss of image detail, compounded by dramatically shrunken file dimensions.

The Sony Cyber-Shot DSC-TF1 tough camera is also tough to reach conclusions on. On the one hand are its refreshingly subtle looks and attractive price tag, yet questionable ruggedness mean it's doubtful this could survive as much abuse as its rivals.

But assuming you don't give it too hard a time, the Sony TF1 will still go where other cameras can't and produce image quality in line with most direct competitors.

Having a tough camera with looks to suit any occasion is pretty unusual. General operation is also effortlessly easy, especially combined with the fast, reliable autofocus system and optical image stabilisation.

Lens performance is also good, with minimal chromatic aberration, a useful wide-angle setting and reasonable telephoto reach for this type of camera.

The trade-off of the Sony TF1's discreet design seems to be slightly compromised toughness. It doesn't exude the solidity of say a Pentax WG-series camera, and you don't get some of the action-orientated extras either.

Limited effect filters are another indication of where costs have been cut. However, given the lacklustre panorama feature, maybe fewer effects aren't such a bad thing.

Image quality is nothing to shout about either, thanks to some detail smearing and image noise throughout the sensitivity range, yet these are problems that plague plenty of similar cameras.

Sony's TF1 is a capable action camera, and while it may not be as tough as some, it's at least styled to look good in any environment.

Considering you're getting a toughened camera with reasonable specs for modest money, the Sony TF1 is undoubtedly good value, even if it is a bit short on features and can only muster mediocre image quality.

Next Page Image quality and resolution