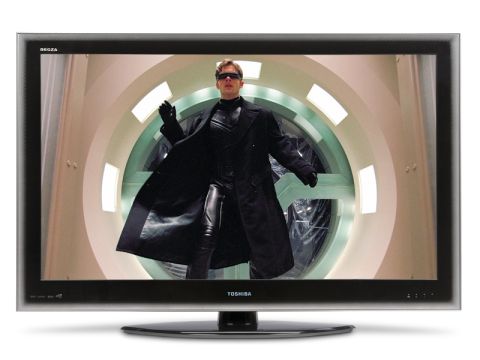 All the features and snazzy styling can't quite make up for the flawed pictures, but this is an otherwise impressive set

Proudly heading up Toshiba's TV hierarchy is the ZV range, which represents the very best the brand has to offer. The 47ZV635D packs a full house of features, including the alluring Deep Lagoon finish – a graduated blue/grey edge around the bezel.

Chief among its features is MetaBrain, Toshiba's umbrella term for a range of processing modes that includes Resolution+ detail/edge sharpening and Active Vision M200 HD Pro.

The latter achieves blur-free movement by adding frames in between the real ones to up the refresh rate (as well as polishing up every other aspect of the picture).

Meanwhile, Auto View analyses and adjusts the picture automatically depending on the ambient light conditions and the requirements of the material.

This clever picture function is joined by Dolby Volume, which regulates the incoming audio signal to eliminate nasty jumps in volume such as when the adverts cut in.

The new interface used on Toshiba's latest range is certainly more attractive than the previous system. But finding the setup menu in the first place is tricky, given that the button is hidden away at the bottom of the remote and oddly labelled with the DVD open/close icon.

But once you're in, it's a breeze to navigate, as options are sensibly grouped into their natural categories.

There's a wide range of picture adjustments on offer, too, including an Expert Mode that comes in handy when calibrating the colour levels.

Toshiba takes an 'if it ain't broke' approach to its remote, using the same basic layout as its previous zappers. Our only problem with it is the confusing cluster of keys at the bottom that gets lost in a mixture of TV and DVD player icons.

While the pictures are hardly jaw-dropping, there's nothing disastrously wrong with them, either. Of course, the Toshiba performs best with a crisp 1080p digital feed direct from a Blu-ray deck's HDMI output, which enables its prodigious detail handling talent to shine through.

The Blu-ray version of X-Men 2 looks scalpel sharp, particularly during close-ups of Nightcrawler's or Mystique's mutated faces. The screen resolution picks out gentle indentations and wrinkles in skin, as well as follicles and strands of hair.

It also tackles background scenery detail with entrancing clarity, resulting in a delightfully sharp and punchy picture across the board.

The palette isn't quite as spectacular as the latest flagship sets from Philips and Sony, but the Toshiba still passes muster on vibrancy and dynamism.

Ironically, Resolution+, the mode designed to give standard-definition pictures a near-HD respray, is actually more useful when applied to an HD picture. It gives Blu-ray a boot up the backside, forcefully focusing textures and lending extra definition to shadows and outlines.

But on the downside you need a good Blu-ray transfer to get the best results, as it tends to emphasise any artefacts in the picture, particularly when it's cranked up to the highest setting. We tried it out with some Blu-ray test patterns and discovered that there's some ghosting along the edge of white lines.

The lesson learned is that Resolution+ can produce some stunning results when used sparingly and with the right material.

SD content looks decent enough; the combined effects of Active Vision M200 HD Pro and Resolution+ is a smooth and pronounced picture with convincing colour reproduction. The latter immediately injects extra detail and focus into DVDs and Freeview broadcasts, but it's hard to ignore the noise that permeates the picture, most notably whenever Resolution+ is turned on.

The 47ZV635D's sound isn't bad, but it still falls some way short of the mark. The problem is the lack of low-end presence, even with the bass setting cranked up high and Dynamic Bass Boost activated.

But Dolby Volume does a great job of boosting the inherent dynamism of the sound and levelling out sudden changes in volume.

The staggering amount of features on board means you get a lot for your money. Resolution+ is as brilliant as ever, but it's still not the answer to all the set's picture issues.

So the 47ZV635D misses out on those coveted five stars overall – a shame, as in every other respect it's a genuine triumph.