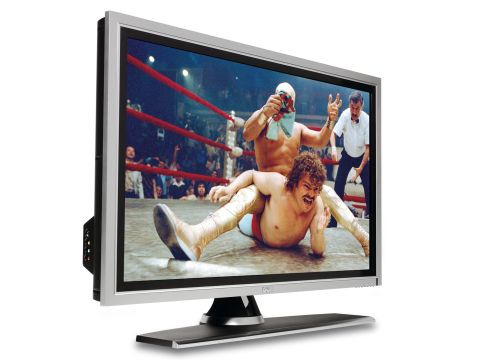 An off-target effort, showing that Dell has much to learn about making quality TVs

The popularity of LCD TVs has seen PC manufacturers attempting to break into the flat TV market and Dell is attempting to do this with this HD-ready 37-inch model: the W3706MC.

Dell's roots in PC hardware are instantly apparent in the W3706MC's design: the slender, grey frame looks like a giant-sized computer monitor. Still, it's got its specifications under control, with a 1366 x 768 resolution, and claimed contrast ratio of 800:1 and brightness of 500cd/m2.

Aesthetic improvements come in the form of a pair of meaty-looking detachable speakers, which shows that Dell hasn't just stuck two tuners into one of its monitors.

This set's connections just about tick the right boxes, even if they do have the whiff of the beginner about them. Although the presence of an HDMI is welcome, two are really a standard feature of new HDTVs. With the multiplicity of hi-def devices out there, two HDMIs is becoming a necessity rather than a luxury.

Still, there's a DVI - switchable between video and PC use - and a common interface slot for adding Top Up TV pay-TV channels to the Freeview package from the TV's digital tuner. Component video inputs, Scarts and a subwoofer line out complete the range of sockets.

The digital tuner supports a seven-day electronic programme guide, but Dell seems to have made a hash of things. The guide can only access information for the channel that's currently on, and you're only able to scroll through future programmes one at a time. This isn't helpful if the show you're looking for is on TV a week later. A magnifying glass is also needed, as the description text is painfully small.

The W3706MC looks like it has a couple of tricks up its sleeve, though. There's Pixelworks DNX image processing engine on board, SRS TruSurround processing, a Midnight mode for boosting the TV's sonics, as well as some picture-in-picture modes.

Despite the good groundwork this TV puts in, it falls flat on its face once we begin to put it through its picture paces. Whether you're watching high or standard-def material, the softness of the picture is unavoidable. This is particularly noticeable with a Sky HD feed: it's distracting, and renders you unable to immerse yourself in the big screen hi-def viewing experience.

Black levels also get their knuckled rapped. Parts of the picture that should look convincingly black fade to grey instead. There's a real lack of detail and backlight seepage adds to the overall chaos. There is some consolation in that this Dell's pictures are impressively free from noise, but when there's so much to distract your attention in a negative manner, this is a case of shutting the barn door after the horse has bolted.

At least Dell got its act together for this TV's speakers. Costing an extra £190, these Logitech add-ons look substantial and they manage to create a quality soundstage, with bags of bass and subtle treble details.

Speakers alone don't make a great LCD TV and the W3706MCs pictures have been well and truly fudged. There's little to recommend here for anyone who wants an LCD TV, especially at this price.