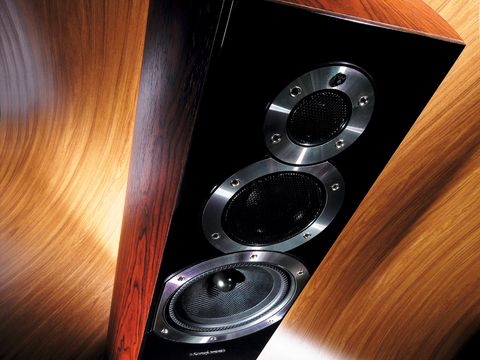 The unusual dome midrange driver seems well justified here for the superior coherence it brings to voice reproduction, both spoken and sung. The tonal balance might be a little too rich and laid back for some tastes

This set of Diamond 10.5 loudspeakers is just one product in a new line from the well established hi-fi manufacturer Wharfedale.

Founded way back in the 1930s, Wharfedale has one of the longest histories in hi-fi, though 75 years has seen several changes in ownership and downs as well as ups.

The company that ruled the UK market for the best part of half a century might no longer enjoy its earlier dominance, but IAG (the International Audio Group), its owner since 1997, is in for the long haul and has every intention of re-establishing its previous pre-eminence.

Alongside Wharfedale, IAG owns Quad, Mission and Castle Acoustics (plus Audiolab and Leak). IAG itself is owned by two Taiwanese Chinese hi-fi enthusiast brothers, Bernard and Michael Chang. Their operation is based on a huge factory complex with around 2,000 workers.

This operates a policy of 'vertical integration', which means that virtually everything needed to build a loudspeaker – drivers, cables, enclosures, crossovers and so on – is made in-house.

Three months ago, Peter Comeau took over as Director of Acoustic Design at IAG's hi-fi Division.

The first fruit of Comeau's involvement is a brand new Wharfedale Diamond 10 range, which includes no fewer than eight stereo pairs, plus numerous home cinema extras. Eight models does seem a trifle excessive – most manufacturers make do with four or five – but we were told it was needed to cope with the wide variety of tastes across a global marketplace.

Chinese consumers, for example, like speakers with a lot of drive units. There might be some Chinese influence in the styling too: plenty of bling is visible when the grille is removed, with a glossy black front and super shiny finish on the plastic driver frames. A much more demure black grille is available, which neatly fixes onto the hex sockets of the driver woodscrews.

The Diamonds have been Wharfedale's entry-level hi-fi models since the early 1980s, so high perceived value is an essential part of the agenda. Whatever one's reaction to the bling, this three-way floorstander is a lot of loudspeaker for £480.

Probably inevitably, finish is vinyl woodprint, but the catalogue lists no fewer than seven options. Our samples came in 'Roswood Quilted', whatever that means: they certainly look pretty good, even though touch betrays their synthetic origins.

Despite the low price, the Diamond 10.5 ticks many of the boxes. Curved sides should help stiffen the enclosure and distribute internal reflections and standing waves. A composite front panel provides a secure driver mounting platform.

A separate plinth is fitted for secure spike accommodation, though regrettably this doesn't extend the stability footprint one iota and the spike lock-nut arrangements are very difficult to tighten properly. The rear panel has twin terminal pairs, linked by brass strips and fitted to a fairly tough-looking moulding; there's also room for a port.

The driver line-up is certainly distinctive. Dome-type midrange drivers are usually only found in much more upmarket speakers, so the 50mm dome used here is rather unusual.

There are pluses and minuses: the main advantage is that its relatively small-diameter diaphragm helps maintain consistent dispersion as frequency rises. The disadvantage is relatively modest sensitivity, due again to the small diaphragm and large (hence heavy) voice coil.

Auditioning was carried out in a heavily furnished and somewhat irregular 4.4x2.6x5.5m (WxHxD) room.

In-room measurements make it quite clear that the Diamond 10.5, with its port tuned to 50hz, is best kept well clear of walls – if anything there's some mid-bass excess on this occasion, though that will help balance out the lack of deep bass output. The speakers were, therefore, positioned 2.2m apart with their backs 0.8m from the nearest wall.

Most of the listening was done on a system with a Naim CD player, a hybrid Rega/Linn vinyl player and a Magnum Dynalab MD 106T tuner, all of which were amplified by a Naim NAC552/NAP500 combo.

The overall tonal balance here is progressively down-tilted from the bass to the treble, so that the overall character might well be a little too warm, rich, and laid back for some tastes and systems.

Male voices consequently do have a touch of chestiness, and the high-level 20hz sinewave signal used for response testing also showed audible harmonic distortion. One consequence is that although the presence band is nicely open, it's also a little laid back.

This might sound a bit of a contradiction in terms, but it's actually rather effective. Voices are very convincing, yet consonants and sibilants rarely, if ever, sound aggressive, even when played loud, though the volume may have to be turned up a little to maintain good intelligibility.

The restrained top end does somewhat restrict the impression of air and transparency, but it might also be regarded as a positive benefit when viewed in the context of an inexpensive system.

Over and beyond these tonal balance factors, and in fact much more important in the overall scheme of things, the voice band in particular is notably well projected and reveals a very good coherence. That in turn leads to believable and informative music making, albeit within certain limitations.

Although enclosure colourations as such seem very well controlled, there's also a lack of midrange transparency and some associated 'pinched' colouration that becomes progressively more intrusive as the volume level is increased.

Lateral stereo images are well positioned and focused, but show little in the way of depth, and while the midband is certainly impressively communicative, subtlety, delicacy and dynamic expression are a little weak. Turning up the wick also tends to make that mild bass excess rather more obvious, both in terms of rather too much warmth and a slight tendency to thump, presumably when the music, the port tuning and a prominent room mode all coincide.

The Diamond 10.5 is a much less expensive loudspeaker than the overwhelming majority of models that come into our offices for review. Some performance compromises and consequent criticisms are therefore inevitable, but shouldn't detract from the fine value for money and interesting engineering solutions.

In particular, the use of a 50mm midrange dome to cover the vital presence zone with one driver (roughly 800hz-3.8khz) is surely responsible for a voice-band integration that is clearly superior to the norm. And from a musical and communication point of view, that coherence is clearly more important than the minor balance anomalies.