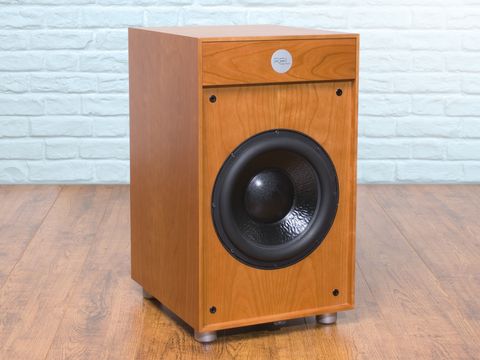 Noted aggression: With baffle removed, REL’s B1 driver glares in all its glory

The big REL sub bass system in this gang of four is from its Britannia range. Conceived before the Lord of Bass (that's Richard Lord, to most people - Ed) sold up to Sumiko, and developed right through the process of changing parent companies, the B1 is an important product for the new REL owners.

The model claims to offer all the performance of bigger (gulp!) models in the REL range, and indeed has a significant percentage of REL's flagship woofers' performance characteristics. These include two clever rotary switches for roll-off, one coarse and one fine, that combine to offer 24 crossover points from 95Hz down to 22Hz.

It also has a facility to plug in both the speaker level input simultaneously with the phono signal level input and mix them by way of a gain control, ensuring each is still part of the pie.

As on previous models, you'll find odd-looking Neutrik pro audio Speakon plugholes, which is where you stuff the supplied wire from your speaker feeds. The phonos are not paired but rather 0dB or +12dB (the latter to perhaps to match with a THX LFE output). Setup is via a rotary phase control. Adjust it until you get the biggest gain in the room.

The model is not nearly as pretty as the glass-topped Reference series; it's a bit slabby in an old-model Volvo way, but has the de-rigueur blue LED in the front and a handsome grille through which you can see the mighty driver lurking. This has a huge top roll surround and is as job-specific as an anteater's tongue.

The output is prodigious, with a large extension from the Acoustic Resistive Matrix enclosure. The box is weighty and complex, and allows for an insane depth and range of low frequencies to be propagated.Its character is melodic with superb control and lycra-tight accuracy.

The result is a fabulously high-end output with both pressure and sustainable weight for fear-register effects and room-bursting explosions.

That said, I can detect a difference in the last iota of performance and grip when compared to the top-end Reference job that lives in my room, but the sound that the Britannia

B1 makes is definitely in that top echelon. It is serious money, but the B1 will grab and twist exactly when the director and his sound engineers decide.

The new boys in charge of the brand are clearly just as bass-obsessed as the man who started the company. This is a big powerful sub, albeit one that will only suit a limited number of installations.