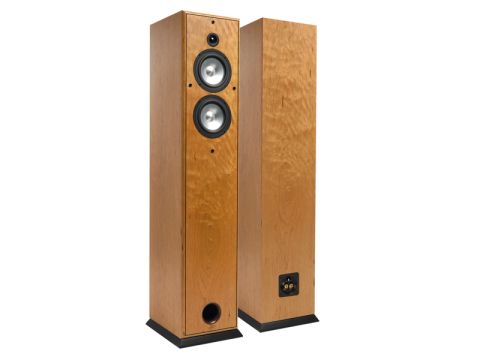 Attractively presented floorstander has the coherence and imaging strengths of a full-range. Dynamics might be more vigorous and have better grip, but criticisms are minor and comfortably outweighed by the positives

Aurousal is a relatively new operation.

It started out with a smart-looking standmount speaker called the A1, based on a solitary port-loaded 'full range' Jordan drive unit with a 90mm metal foil diaphragm (that's claimed to flex progressively towards higher frequencies).

As is usually the way with such systems, this crossover-less system had fine coherence, but delivered limited performance as one moved towards the top and bottom extremes of the audio band.

The £1,650 per pair VS floorstander is intended to counter both these areas of criticism, while adding some extra sensitivity and loudness capability.

Instead of a single metal-diaphragm driver, it uses two in parallel (effectively rather more than doubling the radiating area) and uses its much larger floorstanding enclosure to load them with a variation on the transmission line theme.

There is also a tweeter, included as a 'variable' option: it only augments (rather than replaces) the main drivers and a little knob tucked next to the input terminal pair allows its output level to be adjusted (upwards from zero) according to personal taste – a neat example of having one's cake, yet also being allowed to eat as much or as little of it as one likes.

The enclosures (on our samples) came in a particularly handsome real wood veneer. The standard choice available here is between light and dark cherry veneers, or piano black lacquer at an additional price premium of £200.

Built from veneered 20mm panels, this substantial enclosure comes fitted with a little black chamfered plinth, which accommodates the well-founded, though rather blunt spikes and just slightly extends the footprint and stability margin.

The enclosure is reinforced by an internal vertical partition and is said to load the main drive units by a variation on a quarter-wave transmission line theme, where the line is terminated by the mass of air in a reflex port.

It's difficult to say exactly how this operates or is implemented, but that's always been true of transmission lines in general, as their impedance traces look just like a much simpler reflex-ported arrangement. The design is apparently based on work by Dr Martin J. King, and further details may be found at www.quarter-wave.com.

Ted Jordan was one of the earliest pioneers of metal diaphragm drive units and has been refining his designs for more than thirty years to create the controlled flexure that enables practical full-range operation.

Although the cones used here are just 90mm in diameter, the combined area of the pair is rather more than the cone area of a nominal 165mm unit and the effective area of the two drivers is actually rather larger still, because of the way they couple acoustically. At the same time, because the width is just 90mm, good lateral dispersion will be maintained to a reasonably high frequency.

By using a twin driver arrangement, as here, the sound radiation pattern is modified from a point source to something moving towards a line source. Whereas a point source effectively radiates sound in a spherical pattern, the pattern generated by a line source tends towards cylindrical, increasing the 'throw' into the horizontal far field and reducing the relative quantity of sound radiated upwards and downwards, which should improve stereo imaging.

Full-range-driver speakers rarely generate sufficient output towards the top and bottom ends of the audio band, but the VS, with its port tuned to around 33hz, turns out to have more than ample sub-55hz bass output.

Sensitivity on our measurement is a generous 89dB (2dB better than claimed, perhaps because we base our figure on a far – rather than nearfield measurement?). To put this useful figure into context, bass output is a strong -3dB at 20hz, and about +4dB between 28hz and 55hz; the amplifier load stays mostly between 4 ohms and 6 ohms throughout.

The overall tonal balance under in-room conditions holds within impressively modest +/-3dB limits from 60hz up to 3khz (in-room, far field), though it should be added it's not particularly smooth.

There is good treble extension even when the tweeter is effectively turned off, but the degree of treble roll-off above 3khz is significantly greater than the ideal under these conditions. This can be more than compensated by turning the control up, as this can add up to something like 8dB at 20khz and looks very well integrated with the main drivers.

Aurousal promised exceptional stereo imaging for the VS and this was amply confirmed in our listening tests, which turned out to deliver spectacularly good stereophony with excellent depth perspectives.

The overall tonal balance is also very satisfactory indeed, especially when the treble control is carefully adjusted: subjectively we found the halfway setting on the control about right and this was confirmed by our measurements. The little potentiometer on the terminal block is clearly well-chosen.

The bottom end can thump with some material, so it's essential to keep the VS well clear of walls. Indeed this factor probably explains why some degree of tweeter output is desirable, as it's subjectively desirable to balance some excess at one end of the band with compensating strength at the other.

If the tweeter is turned right down (presumably completely off), the overall character is dull and heavy. Add some extra treble – enough to be audible, but not enough to be too obvious – and the extra air lightens up the character and restores a natural neutrality.

The sound could be sweeter through the voice band and has a thin, edgy and bright character, though it does have good clarity and very good coherence.

The speakers sound particularly good on the heartworn highways CD, a relatively simple but very high-quality recording of country music from the early 1970s, but the same was also true of other fundamentally simple recordings – and indeed radio broadcasts – which the basic simplicity of this speaker system seems to complement beautifully.

For the very best results, the ears should be equidistant from the two main drivers, so the mid-point between the two drivers should be aimed directly at this listener's head. This will deliver the best possible coherence and stereo focus, as well as maximum upper treble. To this end, it might be desirable to arrange the spikes to give the speaker a slight backward tilt.

Although there are no serious or obvious weaknesses here, the real strength of the Aurousal VS lies in its exceptional overall coherence and superb stereo imaging and while the latter shows a worthwhile degree of transparency, dynamic expression and tension are both a little weak and the speaker seemed rather happier when dealing with acoustic sources rather than heavy rock or dance material.

Above all, it takes the concepts and strengths of the full-range driver system and deals rather successfully with the limitations that are usually experienced towards the frequency extremes and that is an achievement that's all too rarely achieved.