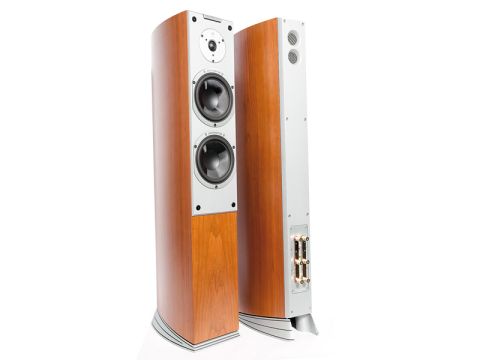 This splendid loudspeaker does most things very well and even includes a useful ability to upgrade performance by stages in the future. Its fine openness and freedom from boxiness confers good musical communication and stereo imaging

Audiovector might not be one of the larger Danish loudspeaker companys to participate in the global hi-fi scene, but it does create models that bristle with original and interesting ideas.

We've reviewed some half-a-dozen examples to date, but these have been spread across a 15-year timespan, and the current distributor, South Yorkshire dealer Mayflower Sounds, is the fourth operation to take on the company during that time.

In truth, Audiovector finds UK distribution no more difficult than any other overseas brand, but over the years, very few non-UK firms have managed to get themselves properly established here.

Yet few deserve UK success more than Audiovector, which has a string of mostly worthwhile USPs to shout about. The most interesting of these is, perhaps, the upgradeability concept.

The four S3 models in the S-series are identical in size and configuration, but purchasers can start with the base model and subsequently upgrade its performance.

This £2,600 S3 Super is just one rung up the ladder from the 'standard' S3, while above it the Signature and Avant-garde models include superior components at higher cost, with the option to move up the ladder, if desired.

The basic ingredients of the S3 Super appear to be conventional enough: two 165mm main drivers, plus a solitary tweeter housed in a very attractively presented and reasonably compact floorstanding enclosure. The two sides are curved towards a narrower back to minimise internal standing wave focusing and the enclosure is mostly decorated in a smooth and very nicely finished real-wood veneer.

It was cherry for our samples, with black, rosewood, maple or silk-finished silver the options. This Super variation features an extra silver painted half-baffle and thick back panel for additional stiffening, with exposed magnets holding the optional grille in place.

A matching moulded plinth tilts the base slightly at the back (again to reduce standing wave focusing), and supplies an outlet for the port. This plinth accommodates the spikes securely and does also extend the footprint, but only slightly, so physical stability remains rather marginal.

Such technobabble notwithstanding, the S3 Super does incorporate several features worth further examination. The main drivers' cast frames have three-point fixing to ensure firm and accurate contact and use 120mm diameter cones formed from a woven carbon fibre and Nomex sandwich.

The tweeter has a 30mm fabric dome, the rear of which is vented through two holes at the top of the rear panel – the SEC treble system, which adds some extra high-frequency airiness via room reflections.

Possibly, the most interesting feature doesn't seem to have found its way into the documentation. There's a little switch between the three pairs of terminals labelled 'on/off'. Experiment revealed that this switches in or out a high pass filter feeding the upper main driver, so that the speaker may be converted between three-way and two-and-a-half-way operation. The latter is the 'normal' setting and supplies substantially more bass output.

First impressions were a little disappointing, as the overall tonal balance sounded rather cool and lean, while the upper-mid was distinctly forward and exposed, factors which inevitably dominated the sonic character.

Furthermore, these two subjective observations were clearly confirmed by the far-field in-room averaged measurements we made. However, this was using the delivery settings.

When we moved the switch to the upward position, we effectively converted the speaker from three-way to two-and-a-half-way operation, lowering the impedance through the bass region and boosting the bass. This transformed the sound into a tonal balance that was not only much more acceptable to us, but which was actually very good indeed.

Surprisingly, when I mentioned this to Simon Pope, who is currently acting for Audiovector in Britain, he commented that the speakers had sounded much more comfortable in his smaller, squarer room with the switches down. This clearly illustrates the importance of the interaction of the loudspeaker with the listening room, as well as the usefulness of the adjustment provided by those switches.

That aside, with the switches up (and therefore an impedance trace around four ohms through much of the bass region), the S3 Super delivers a very decent averaged in-room response which holds within very respectable +/4dB limits from 60hz upwards. There's rather too much 50hz output and smaller peaks are visible at 850hz and 1.8khz, but otherwise the trace looks pretty well ordered, with decent in-room extension down to 24hz or thereabout.

However, a sensitivity rating of 89dB looks more realistic than the specified 91dB and a 6ohm rather than 8ohm nominal impedance. While the measured performance goes some way towards defining the sonic character of a speaker, it's no substitute for listening to music and it's here that the S3 Super really shines (switches up everyone!).

Midband voicing is particularly impressive, timing is very good and there's plenty of notably coherent musical detail. Although the bass end might have a bit more weight and authority, it's always agile and informative while the midband is commendably free from any boxy colorations.

Even the measured upper mid-peak is barely audible and it is certainly not in any way intrusive. Indeed, this Super is so good it's quite difficult to conceive that there are two stages of upgrade that presumably perform even better.

Perhaps its most engaging quality is the open midrange, which might not be the last word in dynamic grip and tension, but which is always informative with very little audible coloration. Another key factor is the lack of boxiness, which ensures that the actual speakers themselves do a very good job of 'disappearing', aurally speaking, while the stereo image they create is well-formed, with good focus and a good measure of depth.

The top end does just what it's required to do – add appropriate detail while remaining discreet and not drawing unwanted attention to itself. I presume the tweeter fitted here is a little less sweet and transparent than the more costly example used in the Signature, or the planar device found in the Avantgarde, but it certainly does what's required without fuss or foible.

The secret of a fine loudspeaker is not found in any one characteristic, but rather in achieving a good balance across a range of different qualities. That is the real strength of Audiovector's S3 Super, which is a good looking speaker that delivers a genuinely high all-round standard of performance at a realistic price.