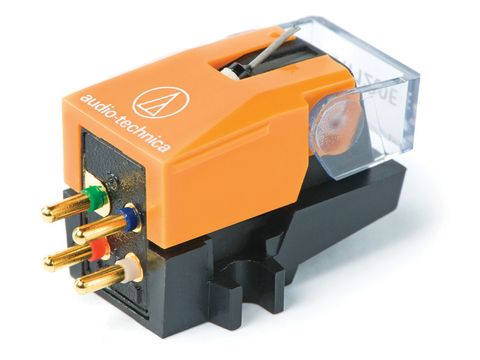 This cartridge is particularly good with rock and similar music

Audio-Technica is one of the two leading cartridge brands from Japan (the other of course being Denon). It maintains a good range of models, both moving-magnet and moving-coil, the AT120E/T being one of the former.

Its appearance looks quite budget and the packaging is nothing fancy, but there's some clever technology inside including AT's 'Paratoroidal Signal Generator' assembly.

This is the company's implementation of a moving-magnet generator: it's not fundamentally different from other types, but it is ingenious and is claimed to involve less electrical and mechanical connections than other MM versions.

An aluminium cantilever couples it to the stylus, which has a simple elliptical profile. The stylus is removable and needs to be removed to fit the cartridge, although we were surprised by how hard a pull is needed to separate the stylus assembly from the rest of the unit.

Mounting is via to semi-circular holes in the plastic top plate – not the strongest assembly ever and we would advise against over-zealous bolt-tightening.

AT quotes an unusually wide range of tracking weights for this cartridge – 1 to 1.8g: we settled on 1.5g, which gave secure tracking on all normal discs.

A couple of audiophile test discs gave it slight problems at any setting, but that's common to many cartridges. It seems fairly insensitive to Vertical Tracking Angle (VTA) and we found it to sound sweet and well detailed across a range of discs.

Its bass is a little unpredictable, generally strong but sometimes slightly underwhelming with sustained bass notes. Tonal balance is good, extended in the treble but not over-bright.