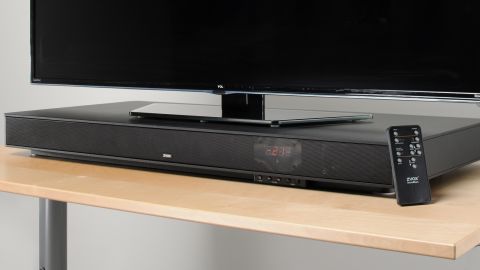 The Zvox SoundBase 670 hits most of the right notes, but in the end suffers from an inability to play the entire scale of home entertainment mediums.

Unlike computers, speakers haven't changed much over the years. We've switched from analog to digital inputs, sure, and I guess we've figured out how to simulate 3D sound. But take away the software, and speakers generally look the same as they did 10 years ago.

Case in point: the humongous Zvox SoundBase 670 that came out late last year to the tune of $499 (about £320/AU$630). (Sorry, readers abroad: you might have to import this one.) The first, almost identical-looking soundbase - Zvox's term for a soundbar that sits directly beneath your TV and acts as a faux-pedestal - came out in 2003.

So what's the hold up? If everything else is shrinking, why aren't 5.1 surround sound speakers the size of iPod Nanos? In short: physics. Sparing you the boring details of electronics 101, speakers need a lot of surface area in order to produce ample, but still finely detailed, audio.

It's with that knowledge in mind that we turn to the largest problem to ever plague audio enthusiasts: Where do you put a large, powerful speaker without it taking over your entire living room? One answer, according to Zvox, is underneath your TV.

If soundbars were divided into weight classes, the Zvox SoundBase 670 would almost certainly be in the heavyweight division.

While the 670's low-profile, matte-black design isn't necessarily a revelation for the company, it looks good here and serves its designated purpose.

On the front, you'll find a speaker grille that guards five high-performance speakers, plus features four buttons (power, volume down, volume up, input) and a 3.5mm jack. Behind the grille on the right side is a four-digit LED panel that will display channel, error and status messages.

Turn the SoundBase over, and you'll uncover three drivers located behind a grille that act as subwoofers to bring meaty-sounding bass to the 670's sound profile.

Finally, on the back, you'll find two optical-audio, a coaxial, two sets of analog and one sub-out jack that'll handle incoming and outgoing audio.

Not mentioned, but still equally important, is the built-in Bluetooth radio, but I'll get back to that in a minute.

Before delving into the system's performance, it's worth mentioning how exceptionally easy it was to set up the system.

From box to shelf, getting the SoundBase ready took less than five minutes. Before 10 minutes had passed, I was listening to Tidal using an auxiliary cable coming from my PC. Try doing that with a 5.1 system.

Once I had everything connected it was time to compare TV dialog to videogame sound effects and movie scores to music genres. What I noticed is that while the 670 performs quite admirably in the TV and movie realm, it didn't do as well with music and games.

On its default setting, details in sound were lost to the growling bass while highs and mids made an appearance, but didn't shine through. And, thanks to the always-on surround sound, dialog details were lost among the sound effects in games like Mass Effect 3 or Middle-earth: Shadow of Mordor.

Thankfully, changing the balance is a cinch. Should you choose to use it, treble and bass controls can be found on the pack-in remote - as is an output-leveling button that creates a more balanced sound.

And, while it has its problems, the PhaseCue II virtual surround sound that uses software to create a wider soundstage isn't always a thorn in your side. Some films actually sounded better with the effect cranked to its highest setting.

Other notable features include Accuvoice, which replaces Dialogue Emphasis (DE) as a mid-channel booster found on the SoundBase 580, and that built-in Bluetooth.

I found the former absolutely necessary in games and movies and the latter, while finicky at first, is stable after a successful handshake with your device.

Despite a few audio faux-pas, the Zvox SoundBase 670 hits most of the right notes. Its gorgeous, enormous matte-black cabinet may be a little obtuse for living room minimalists. But those willing to spare the space will be rewarded with exceptional sound for their favorite movies and TV shows.

However, while the speaker does justice to shows like Game of Thrones, I was disappointed by the 670's inability to produce the shimmering highs and rumbly lows needed for an ideal music-listening experience. Not to mention that dialog in videogames was often drowned out by Zvox's surround sound method.

While the convenience in setup and performance in the mid-range make the SoundBase 670 one of the best TV sound systems out there today, those looking for a more versatile, all-encompassing speaker are best served skipping over this track.