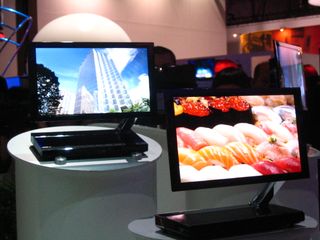 More OLEDs on the way - but services are crucial, says Stringer

Sir Howard Stringer delivered an upbeat keynote address to CES 2009 this morning, presenting a vision of a more service-orientated Sony and ending with a promise that 'if you can imagine it, we can help you make it real.'

There were few technological surprises during his 90-minute presentation – a prototype folding OLED display, an ungainly webbed-up alarm clock and some ugly video sunglasses being the slightly underwhelming highlights.

Instead, Stringer looked relaxed and confident as he breathed a sigh of a relief over the triumph of Blu-ray, reiterated Sony's commitment to High Definition and promised that 90 per cent of Sony product categories would wirelessly connect to the internet and each other by 2011.

The presentation opened with a trailer for Sony's May blockbuster movie Angels and Demons, a sequel to the Da Vinci code starring Tom Hanks, who arrived on stage as the first of Stringer's celebrity co-stars.

Hanks showed why he's still one of the most bankable stars in Hollywood, treating the audience to a charming deflation of CES's typical corporate fluff as Stringer laid out seven 'imperatives' for the consumer electronics industry.

The first two were the most telling: embrace the fusion of electronics, IT and entertainment; and adopt service-enhanced philosophies. This theme was picked up by PlayStation chief Kaz Hirai, who barely mentioned the PS3 and PSP technologies as he hammered out data on the PlayStation Network, user-generated game content in Little Big Planet and the steady (if slow) uptake of PlayStation Home.

Sure, Stringer paid lip service to welcoming open technologies, social networking and the environment, but the underlying message was clear: no matter how good your technology, no matter how sophisticated your gadgets, if you don't have compelling content and a first class user experience, you will fail.

There was no mention at all of Sony's recent job cuts (16,000 worldwide), but it was hard to overlook the symbolism of Stringer inviting Oprah's celebrity medic, Dr Mehmet Oz, onstage to discuss how to rid yourself of excess weight (supposedly to promote his new Sony Pictures TV show).

"Your belly fat is the most important predicator for how long you're going to live," enthused Oz, as he measured Stringer's waistline. "The good news is that we can nudge our biology to take us where we need to go."

A new Wi-fi Cyber-shot camera, with free hotspot uploads in the US, seems to be heading in the right direction, as does Sony's timely enthusiasm for 3D content.

Disney/Pixar's John Lasseter and DreamWorks's Jeffery Katzenberg were wheeled on to hype up Sony's role in the future of Blu-ray and 3D but there was a slight disconnect in their visions. While Stringer talked about 3D Blu-rays in the future, Katzenberg saw 3D as a differentiator for the movie-going experience – and they can't both be right.

The Samsungs and LGs of the world can churn out products but only Sony delivers a 'total experience'. It only remained to name-check some of Sony's latest (service) innovations: the Gracenote database, PlayNow Plus unlimited music downloads and Stringer left the stage saying that Sony is at a pivotal moment in its history, that he tried not to believe in impossible and that the economic wind will pick up again.

Is he right? Is he a transformational angel for Sony or a demon cursed to destroy the once mightiest electronics company in the world? Who knows? Just remember Sir Howard, if you can imagine it, we can help you make it real...