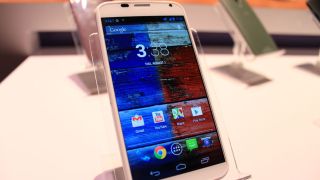 The Moto X looks like a solid handset, but why isn't it coming out outside of the USA?

The universe is expanding due to a phenomenon known as dark energy. No one knows what it is, how it works, or how to explain it. All we know is that it's pushing all the galaxies in the observable universe further and further apart - it's a divisive flavour of energy to say the least.

In the tech universe, meanwhile, the TechRadar reviews section is also expanding. But instead of invoking theoretical physics to explain this fact, we're able to explicate that it's because of non-dark energy being spent relentlessly testing the latest gadgets and gear.

For example. I recently ate a lovely burrito and spent all of the energy derived from it reviewing a TV. Do you see?

Either way, what we can all agree on is that despite it being the traditionally quiet summer slumber period, we're still feverishly churning out reviews of exciting products, and here are the best of the last seven days:

The Motorola/Google phone is out in the open, and while it may pale in specs, it keeps the user experience at the forefront. Or at least, the American experience, at any rate. Because this hot new phone is afraid of flying and will not be journeying to foreign shores. Hands on: Motorola Moto X review

Modest on price, boastful on specs, is the new Nexus 7 the tablet we've all been waiting for? Hands on: New Nexus 7 review

This one's UK-only so non-Britons can move on to the delicious LG TV below. But for any Sky TV lovers in the UK, this £10 media streamer is a bargainous enabler that could be the gadget that turns your home into a tech-enabled wireless haven. Now TV Box review

A hugely impressive user experience makes this 47-inch flagship LED TV fun to use but it lacks the contrast and black levels of its nearest competitors. LG 47LA860W review

The Lenovo Q190 is a tiny computer that you can hide out of sight behind a monitor of TV, but is it too small? Lenovo IdeaCentre Q190 review

This wearable camera enables you to photogrpah your entire day without a single press of a shutter button. Hands on: OMG Life Autographer review

A great Blu-ray player, but the smart stuff doesn't get anywhere near Panasonic's own TV features. So aside from some excellent 4K/Ultra HD upscaling, is there any need to spend this much cash? Panasonic DMP-BDT330 review