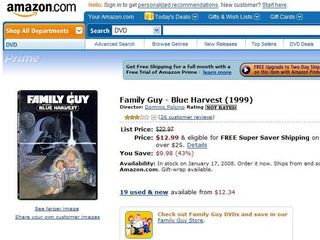 Online retailer Amazon backed up its claims for having its 'best ever' Christmas with sales and profit figures that surpassed expectations, selling $6.7 billion (£4.7 billion) worth of stuff in the last three months.

That's an 18 per cent increase on the same Q4 period in 2007 - and would have been as high as 24 per cent if the strengthening dollar hadn't hurt its overseas figures.

Profits were also up, with Bezos and pals raking in $225 million (£157 million) in the last quarter, a 9 per cent increase on the previous Christmas.

As well he might be. There have been rumours for months that a sucessor to the Kindle is coming soon, but these don't seem to have hurt sales of the original ebook reader, which is still out of stock.

However, it seems likely that the Kindle 2 will finally be announced at a press conference in a New York library (geddit?) in a week's time.

Full year 2008 were also announced, showing Amazon earning $842 million (£588 million) on sales of over $19 billion (£13 billion). This includes a nice litte $53 million (£37 million) from the folding of Amazon's DVD rental business in UK and Germany into Lovefilm.