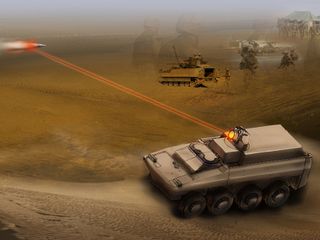 Lasers: from CD players to Blu-ray, our consumer tech lives just wouldn't be the same without them.

But out in the real world, these pinpoint rays of light are being put to some fascinating - even scary - uses that simply boggle the mind.

Thanks to a government preoccupation with lasers that stretches back to the Reagan era, the US military has poured billions of taxpayers dollars in to projects that could see Star Wars-style weapons appear on the battlefield or even in the skies.

One such project is the USAF Airborne Laser - a massive device housed in the body of a Boeing 747-400 that uses vast amounts of chemicals to deliver a high power beam that can shoot missiles out of the sky. In a very real sense it's also a project that may not yet get off the ground - the astronomical costs are forcing cost-conscious senators to question the validity of it altogether.

Developed by scientists at the University of California in Los Angeles, STEAM (Short-Time-Encoded Amplified Microscopy) is currently the world's fast camera, taking 6.1 million pictures a second and at shutter speeds of 1 trillionth of a second. No happy snapper, this.

The camera uses an infrared laser, with light beamed at different frequencies for every one of its 3,000 pixels, to capture objects that are normally not bright enough to see. The next challenge for the UCLA team, led by Keisuke Goda, is to increase the resolution to many million pixels, while also increasing the amount of pictures that can be snapped to 100 million per second. Unfortunately you're unlikely to find the camera in your local high street any time soon - it'll be used to capture sub-atomic particles.

This one's a bit closer to home. General Electric, venerable US maker of everything from solar panels to domestic appliances, has developed a holographic optical disc the same size as a DVD - and it uses blue laser technology to harness it.

The disc currently has a maximum capacity of 500GB - 10 times that of the highest capacity Blu-ray discs. General Electric says discs - and presumably players - could be on sale within the next couple of years, leading to all kinds of exciting possibilities for next-gen games consoles like the Sony PlayStation 4 and, of course, for watching 3D or even Ultra HD movies on future TVs.

You're working in a science lab and your job today is to grab hold of an individual cell under a microscope, twist it, turn it and generally move it around. How? You obviously can't use conventional instruments, which is why optical tweezers were developed instead.

Optical tweezers focus beams of laser light which attract or repel individual particles, enabling you to manipulate them every which way you like. Future optical tweezers should now be even more useful than before thanks to the pioneering work of scientists at Pennsylvania State University. They've come up with an L-GRIN fluid lens that enables optical tweezers to be used with even greater precision.

Last November, Northrop Grumman announced Firestrike - a ruggedised laser weapon capable of delivering 15kW power per unit, with the ability to combine these units into even more powerful weapons - great for taking out baddies on the battlefield.

Northrop Grumman went several steps better last March, finally announcing a 105kW laser, the first to be dubbed 'weapons-grade' - that is capable, reliable and powerful enough to be used in theatres of war on land, at sea or in the air.