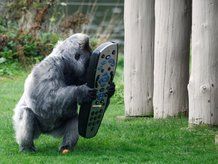 Has he been monkeying around with his Sky+?

Those people who modified their Sky + unit to add that little bit more capacity may find the latest firmware update could render their box useless.

For a certain set-top box – believed to be the 40GB Pace V2 – any tinkering with the hard drive may cause a problem with the latest firmware upgrade and could leave the unit bricked.

Although Sky are considering rolling back the upgrade in order to solve the problem, they have pointed out to The Register that modifying your equipment does invalidate your warranty.

"We regularly upgrade the software in Sky+ boxes as part of routine maintenance and product enhancements," said Sky in a statement.

"All software is tested rigorously against each hardware type of the box before being downloaded to customers' boxes.

"We're investigating reports from a small number of Sky+ customers whose boxes are experiencing problems following a recent software update.

"Although our investigation is continuing, the problem appears to be isolated to a small minority of owners of a particular type of box, which in turn represents about 5 per cent of all Sky+ boxes.

"After reviewing call centre data and customer feedback, it appears that in the vast majority of cases the boxes concerned have had their hard disk drive changed for a non-standard component.

"While our investigation continues, we are reviewing whether to reverse the software update to provide a short-term fix for the affected boxes. We'll consider longer-term steps once we've confirmed the scope of the problem."

Modifying Sky boxes by adding in a new hard drive is not a particularly complicated operation and tinkering in this fashion is not rare.

However, as with most updatable hardware, problems occur when the new bits that the user has incorporated don't work with any firmware upgrade.