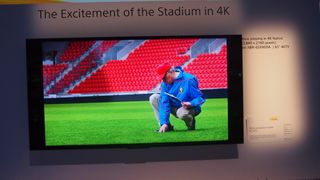 Not only is the World Cup in Brazil next year almost certainly going to be filmed in 4K Ultra HD, but the problem with broadcasting the bandwidth-hungry format will be solved by 2015, according to Sony.

With Wimbledon tennis and this year's Confederation Cup already slated to be filmed in Ultra-HD, it was pretty clear that the Brazil World Cup in 2014 would be filmed in the higher resolution.

Especially given that the Japanese Internal Affairs Committee is aiming to air the tournament using its comms satellites rather than its broadcast ones.

But America Sony Electronics president Alec Shapiro, talking to the Hollywood Reporter, all but confirmed that his company was looking to use its 4K cameras to film the world's most watched football tournament, if this summer of sport went well.

"There's a high level of interest in shooting the World Cup [in 4K]," Shapiro said. "That will probably be determined after the Confederations Cup."

The Sony man also explained a big problem with the next generation of television, namely the delivery mechanism into the home, but he has no doubt that a solution is close.

"90 percent of homes in the US get their programming through cable, satellite or fiber; [4K] is a challenge that these and the Internet [content providers] will overcome in the next two years," said Shapiro.