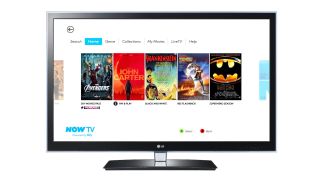 Now TV on your main TV - in this case on Xbox

Director of Now TV Simon Creasey has told TechRadar that YouView represents a key part of the company's plans to get its content onto our main televisions, but that talks are ongoing with a whole host of other platforms.

Sky's Now TV launches on July 16, and talking to TechRadar at the launch of the service, Creasey explained the importance of being available in people's living rooms – with the likes of games consoles and YouView central to that.

"What we do know is that we are talking to a new fresh audience and it's important to get onto the main TV," said Creasey.

"These millions of non-pay TV homes still want to watch on their main television in their lounge.

"So it's great to be on plenty of devices but ultimately we want to be on the main TV and there are lots of options to get on there whether it's Xbox, PS3, Roku streaming player and other devices that come along.

"But YouView is important, YouView is launching and has the potential to be a major platform and, if it is, then we want to be on there."

TechRadar asked Creasey if Google TV figured amongst the platforms that were in talks with Sky over Now TV.

"Absolutely we want to be on the as many devices as we can," added Creasey. "We've had to prioritise because you have to start somewhere and what we have chosen is what we think are the most popular connected devices that we have a great experience of developing for.

"We will look at all platforms over time and work out where the demand is and what the right fit is in terms of putting Now TV on those devices.

"I think we'll be coming back in weeks or months and talking about the next wave of devices, but we are not yet in a position to say what yet."