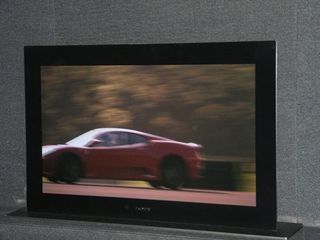 There's a lot of lenticular 3D prototypes at CES this year, and not to be left out Sony has also been showing off its own infant next-gen 3D technology.

One such prototype is Sony's 23-inch OLED glasses-free telly. OLED is seen by many to be the future of TV panels due to the immense amount of brightness they produce, not to mention the thinness and power efficiency benefits.

We were impressed by the OLED prototype without being blown away. Like all the other lenticular 3D screens we've seen at CES this year, depth was severely lacking. This could be a result of the compromises they've had to make in order to limit the ripple distortion that occurs when you move from side to side while watching.

The prototype that Philips showed off at IFA last year was much more impressive in terms of the 3D effect, but it was blighted by terminal distortion as soon as you moved your head.

The fact that the Sony's OLED panel is so small (it's still very hard to make large OLED panels) did not help at all, but even so, it's obviously not a product that's anywhere near production-class.

We reckon the big manufacturers are treading a fine line with all these lenticular prototypes. While they're clearly eager to show what they can do, they risk putting people off buying current-generation active-shutter and passive 3D TVs, while also alienating those who've already got one.

Even so, we're super excited about how far the tech has come in such a small space of time - glasses-free is clearly just around the corner. Toshiba plans to launch its first lenticular 3D TVs during 2011 (although we reckon it's more likely it'll end up being 2012), and it does look likely that the other big names will follow suit in the next 18 months.