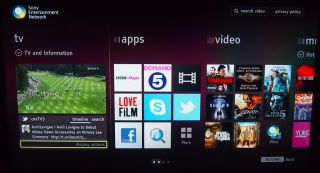 Voice control tech may soon come to the Google TV platform, at least according to a preview video that was accidentally released to the public.

The Google-made clip, which was set to private soon after it was posted, revealed the company's plans to allow users to utter commands and use voice search to discover channels and programming.

The Next Web, which was able to view the teaser before it disappeared, said the new feature will let viewers say a title like "Mad Men" and prompt Google TV to search for TV listings, Netflix and more.

The video also reportedly revealed Google plans to implement a mini program guide, which would allow users to plan future viewing while still tuning into the current show.

Despite an extremely lacklustre two years since Google announced its connected TV platform, it seems the company is still intent on pushing it forward with new features and functionality.

Last week, the search giant announced that it was updating the Google Play app for Google TV, allowing users to rent and buy TV shows, movies and music directly from the store.

A timeline for the voice command feature is unknown at this time.