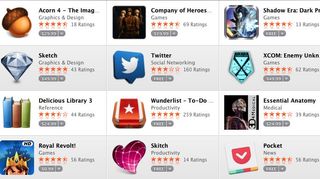 Buy as many apps as you can right now!

Updated 11.20am, April 2: Price increases have now hit the App Store, and Apple has detailed its new prices compared to the US prices for devs on the Apple developer portal.

For Aussies, at it's lowest, US$0.99 apps will now cost AU$1.29, with increases becoming more apparent for more expensive apps. Minecraft for example, which used to cost AU$6.99, will now cost AU$8.99.

We hope you bought up your app wishlist yesterday.

iPad Air and iPhone 5S owners, you might want to go and binge at the app store today. Apple has sent an email to developers that it is increasing the pricing tiers for apps in several countries, including Australia.

The increases, according to Apple, are to account for changes in foreign exchange rates, and will also hit the Indian Rupee, Indonesian Rupiah, Turkish Lira and South African Rand.

On the upside, Israeli Shekels and some price tiers in New Zealand dollars will actually see a price drop.

Apple has stated that the changes would happen within 24 hours, meaning there isn't a huge amount of time for iOS users to save money at the current rate.

It's the first change we've seen in Australia since 2011, when the price of apps dropped due to the strong Australian dollar.

While there's no indication of exactly how much of a price increase we can expect to see, it's unlikely to be a substantial shift given the relative value of the Australian dollar at the moment.