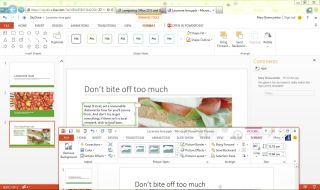 The preview of the free online Office web apps gives them the same Metro look as the Office 2013 desktop apps and a handful of the same features, including the Touch Mode button for spacing icons out to make them easier to tap with a finger and turning on the finger-friendly context menu.

The most useful might be the new Recent files section in SkyDrive, where you can see documents you've opened from SkyDrive recently, whether you used desktop Office or the Office web apps – and whether they're on your SkyDrive or shared by someone else.

Sharing is real-time in all the Office web apps. You can now edit all your SkyDrive documents at the same time as someone you're collaborating with, whether you're using the desktop or web versions of Word, PowerPoint or OneNote.

You can collaborate in the Excel web app, as long as you're both using the web app; if one of you opens the spreadsheet in desktop Excel, you're the only person that can edit it though.

If you're collaborating on a Word document or PowerPoint presentation, you can leave comments and replies in the web apps. In PowerPoint web app you can see the comments while you're editing your presentation; in Word web app you have to be in the preview rather than editing the document, although you can mark comments as completed the way you can in the desktop.

The Office web apps team is considering a fix but suggests having the document open in a second tab as a preview to see comments (although we found we had to reload the document to see new comments rather than having them appear live).

There are some long-awaited features like word count in the Word web app (amazingly, the web app team said they were surprised at how many people wanted this) and changing page layout. OneNote finally lets you search within a page, but you can't search all your notes at once the way you can on your PC or even in the OneNote phone apps (and the SkyDrive-wide search still only finds keywords in the names of documents, not the contents).

Both the Word and PowerPoint web apps have more formatting tools, although what you get is still only a fraction of what's in the desktop apps (and the spelling checker in the desktop apps is still smarter). We like being able to add transitions in the PowerPoint web app, but the only options are fade and push. You can apply a Picture Style like a preset border, but if you've used a shape effect on a text box, you can see it but not change the colour.

You can insert images from the Office.com clipart collection by searching and browsing from your document, but you can't add images from your SkyDrive, Flickr account or from a Bing search as you can in the desktop apps, and you can't insert online video clips (although you can play videos in documents in the web app preview).

There are also odd inconsistencies between the two web apps. You can create SmartArt diagrams in PowerPoint web and insert, resize and rotate shapes; you can't do either in the Word web app and if you have shapes in a Word document you can't even see them in the web app editing view – you can see SmartArt diagrams but only as static images. This is only a preview so perhaps Word web app will catch up.

On the other hand, Excel web app gets features that aren't in the desktop app, like the tool for making a survey and collecting the results in a spreadsheet, as well as lots more tools like PivotTable editing and more slicers for analysing data.

The Outlook web app isn't part of SkyDrive; you get it if you have Exchange or Office 365. It actually had more of a Metro look than most of Office 2010 already but it gets lots of Office 2013 features, including support for Apps for Office like the one that can turn an email into a meeting in your diary.

Some features, like linking duplicate contacts, are actually easier to find in the OWA interface. It's also the first of the Office web apps to get offline functionality, but that depends on which browser you're using.

The other Office web apps work well in a really wide range of browsers, including Chrome, Firefox and Safari as well as IE; they don't need ActiveX, Flash or even Silverlight any more. They're all HTML5 so they work well on tablet and smartphone browsers.

But if you want to use OWA offline (looking at emails, contacts and calendar appointments or writing messages to send when you're online), you need Internet Explorer 10 or later, Safari 5.1 or later, and Chrome 18 or later. That means no offline access on an iPad or an Android tablet (or a phone) until their browsers add more of the HTML5 standards for storage.

In the final release of Exchange, offline access works perfectly with Metro IE10. In the preview version we could set up Offline access from both the desktop and Metro IE browsers but it only worked consistently in the desktop browser.

Now you get offline access to email (up to 400 messages in the Inbox, drafts and any other folder you've opened recently) and a year of calendar appointments, plus you can create new messages and appointments when you're offline and have them send automatically when you go back online. That means that Surface RT and other Windows RT tablets that can't run Outlook can still give you more of the Outlook experience than any other tablet.