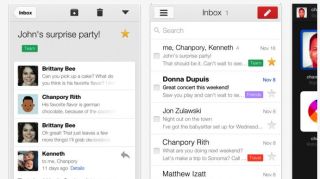 For iPhone and iPad

It took Google six months, but the G-team announced Tuesday that Gmail version 2.0 is now ready for iOS.

The updated iPhone and iPad app provides a "totally new look and feel," the company explained in a Gmail blog post, one that's faster, sleeker and easier than before.

Among the improvements are profile pictures in messages, new animations from swivels to transitions and infinite scrolling in message lists.

Google also added something users have clamored for: multiple account support. Now up to five Gmail accounts are accessible from the login menu. All it takes is a couple of taps to hop to another account.

Quick typers should appreciate Gmail's new autocomplete predictions in search, while those tired of exiting the app to +1 or comment on Google+ accounts can now do it within the app.

Users can also RSVP to Calendar invites. While the bells and whistle features will certainly save time and increase maneuverability, the interface is slimmed down and sleeker, providing a much smoother experience then its predecessor app.

The update comes one day after Gmail version 4.2.1 rolled out for Android, bringing with it improvements like auto-fit options, pinch to zoom, a swipe command to either archive or delete messages and the ability to attach phone-captured videos.

Gmail 2.0 is up for grabs in the App Store now.