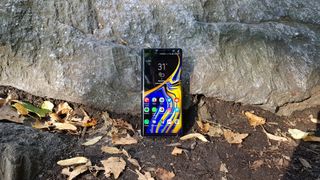 Right now, the Samsung Galaxy Note 9 is available in blue, black, purple, silver and copper shades (though not all colors are available everywhere). But a sixth color could soon be added to the mix, as a render has recently leaked showing the phone in white.

Reliable leaker Evan Blass shared the image on Twitter, claiming to have been tipped on it, though unlike some of his leaks he doesn’t sound certain whether it’s genuine, as he also asks “Photoshop detectives” for their opinion.

The consensus in the resulting thread generally seems to be that the render looks convincing, though that still doesn’t rule out the possibility that it’s a good Photoshop.

Got tipped on this. Eagle-eyed Photoshop detectives, what say ye? pic.twitter.com/KXp4inQtL24 November 2018

So we’d take this with a pinch of salt, but it’s somewhat believable, as Samsung has been known to release new shades for already-released flagship phones in the past.

The introduction of a white color could also help boost sales in the run-up to Christmas. As such, if such a shade is going to land we’d expect to see it fairly soon.

It’s also worth noting that prior to the launch of the Samsung Galaxy Note 9 a white shade was leaked, so this isn’t the first evidence of the color.

We still wouldn’t count on seeing it though, and if you’ve resisted buying the Galaxy Note 9 for this long then you might want to hold out a while longer and see what the Samsung Galaxy S10 is like instead.