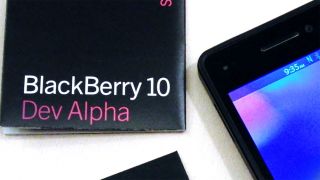 BlackBerry 10 looks nice. Will it arrive in time?

Once upon a time there was a giant firm that made mobile devices, and it was worth an enormous amount of money. Then two things happened: Apple started stealing its smartphone customers, and it wasted loads of money on an odd tablet.

As its business began to bleed money it came up with some genuinely great new products that could have put it back in the game, but they were too little, too late.

Palm's WebOS and PalmPre were good, but the company's fortunes were in freefall. Palm ended up being sold to HP which, in its infinite wisdom, rushed out a half-baked WebOS tablet and probably killed a decent OS for good.

Is the same about to happen to RIM and BlackBerry 10?

The problem is simple. Its stuff isn't selling. The PlayBook was a dud and RIM's about to announce its third writedown since December as unsold BlackBerries pile up in warehouses. It's terrible, terrible news — RIM's terrible performance means swingeing job cuts are coming, and of course that's tragic for anybody affected — and I fear it's going to get much worse.

As Horace Dediu writes on Asymco.com, when you analyse the performance of 14 different phone manufacturers, "There are no examples of vendors who recovered from a position of loss making." RIM's losing money hand over fist, and it's been promising that this year's model will be its comeback model since 2010.

RIM has bet the farm on BlackBerry 10, and it's a lovely thing — but so was WebOS, and that didn't save Palm. It's bringing a new operating system into a market dominated by Apple and Android, and it's doing so against a background of job losses, dwindling market share and increasingly anxious shareholders.

Windows Phone is finding it hard enough to dent that dominance and it's got Microsoft's enormous money machine behind it. What chance does RIM have?

I don't want to see RIM die, but it's future isn't looking too good: even the best case scenario, with BlackBerry 10 devices being an instant and enormous success, means there are several more months of pain to endure. In those circumstances, a buyout's going to look increasingly attractive to RIM's beleaguered shareholders.

That's assuming it stays in business long enough for anyone to buy it: if it goes down the tubes without a buyer, a lot of people are going to find their BlackBerries suffering from the mother of all outages.