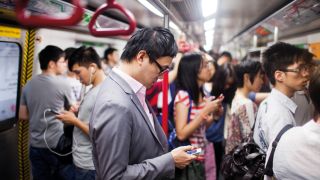 One of the most embarrassing things happened to me when I was checking my phone while walking down the street one day. I was on my way to work scrolling mindlessly through Twitter and I walked straight into a lamp post.

Instead of handling it like the mature young career woman I thought I was, the shock of it made me burst instantly into tears. Bus-loads of commuters had seen and were, I imagined, laughing uproariously together. A taxi driver honked his horn, probably at traffic, but it felt like it was at my hilarious misfortune.

The memory of it makes me want to laugh and be held by my mother all at once.

There's no coming back from walking into a lamp post and bursting into tears on a busy public road. You have to just carry on and hope no one you know or fancy had seen. By 10 a.m. it was a tweet, by lunchtime an office anecdote, and by hometime I'd forgotten it even happened.

Still, it was an experience I'd rather not relive. It's strange that you don't see more people walking into trees and falling down open manhole covers as they check Twitter on the go. It turns out, I am the exception, not the rule, when it comes to clumsy walking and texting.

Researchers at the University of Bath carried out a study and found that people are no more likely to stumble or bump into things while texting. When the researchers put their subjects through an obstacle course, they expected to find that the people answering text messages or solving mathematical problems on their phones were more likely to hit things.

The hypothesis makes sense - you'd think someone whose eyes and mind were distracted to walk into more obstacles than someone who was merrily wandering along without anything to take their mind off clearing the course.

While the group using phones completed the course more slowly, they didn't have any more trouble than the regular group. That's because they moved in a different way - adapting to the decreased awareness by slowing down, taking shorter steps and allowing for obstacles by making bigger movements.

Checking our phones has physically changed the way we walk and we aren't in any danger as a result (though try telling that to someone who just walked into a lamp post).

If checking our smartphones has already changed the way our bodies and minds work together, what other effects could today's technology have on us? If we carried on using them in the same way for thousands of years, could our iPhones and laptops actually affect the way humans evolve?

We talk about evolution a lot in "technology media" - we expect every new product to have "evolved" into a better, faster, stronger version of its former self. But human evolution is a totally different ball game.

While products run in one-year cycles, humans reproduce at a much slower rate and evolution basically comes down to "survival of the fittest", so characteristics are handed down through breeding. Wisdom teeth, for example, are a leftover trait from when humans ate mostly leaves. Some experts think we are still slowly evolving this way.

Technology as we currently know it will very likely change our behaviour (like the way we walk), but it's not likely to affect the way the human body evolves.

"There's a reason people in the trendiest coffee shops tend to have Macs in front of them," says Paul Craze, editor of Trends in Ecology and Evolution, the world's top-ranked journal on evolution.

"Apple products are considered more cool. Why be cool? It makes you more popular. Why is being popular good? Whether it's done consciously or not, being popular makes you more influential culturally and also gives you the chance to get laid more often and with higher quality mates."