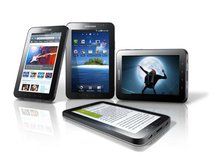 MobilePrint will be built into new Galaxy Tabs

Samsung has announced a mobile printing app for Android and iOS devices, known as MobilePrint.

The app, which will be available for free before the winter is out, allows users to print documents and photos from their handset to a nearby Samsung printer, either by Wi-Fi or a network link.

MobilePrint also enables users to select and print a number of images at the same time from directly within the handset's image gallery.

As well as printing, you'll be able to view and make minor edits to documents scanned using a connected Samsung multifunction printer.

It's not the first app of its kind; both Android and iOS users have been able to print from their handsets using apps such as PrinterShare for some time.

But if you're a Samsung printer owner, the MobilePrint app could save you some time installing and connecting printers since it automatically detects and connects to any nearby Samsung wireless printer.

The free app will also be built into the Galaxy Tab starting this year, and is compatible with all new and existing Samsung wireless and network printers.