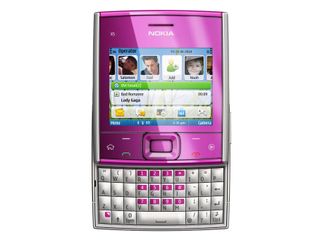 Nokia has announced the crazy looking new Nokia X5 smartphone to plug a (previously unseen) gap in its portfolio.

Rather than the standard tablet candybar phones that are cloning one another in the market at the moment, Nokia's new X5 is a square design with a slide-out keyboard.

The phone features dedicated media control keys, a 3.5mm headphone jack and a 5MP camera with LED flash, so it's not a terribly-specified device.

It's also got a 2GB microSD card in the box to supplement the 200MB onboard memory, which can obviously be upgraded, especially if this does land in the UK as a Comes with Music device as well.

If you own an iPod Nano and get irritated when you're walking and the song suddenly shuffles due to being shaken too much, well, that could happen with the Nokia X5 as it supports the same feature, except this time you SPIN the phone like a DJ to activate the service. No, we don't know how either

You can also shake the phone to find out how many unread messages you have too – so if you're like us get ready to run and hear the word zero through your earphones over and over again.

Nokia has given the X5 a release date of some point in Q3, with a pre-tax price of €165 (£135), although we're still yet to get firm information over a UK release date.

In related news, Nokia has also upgraded/downgraded the X6 – it now comes with 8GB of internal memory and should sell for around £190 when launched in Q3.