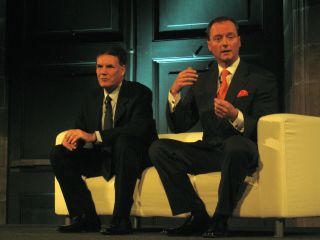 Nokia didn't shock at its Mobile World Congress press conference this morning, but it did show off four new handsets as well as futher details of its

The big question had been whether the Finnish company would launch any kind of iPhone-basher. We didn't get it, so it was bound to be the first question asked by the press pack. "We have said we are platformising touch," Niklas Savander, head of Nokia's Services and Software division.

"We have said we will bring out touch products. However, we don't want gimmicky touch products. That means Nokia will plan to incorporate touch into a range of phones, rather than a single model. "As a user I don't want to see our heritage [in terms of existing apps] wasted."

President and CEO Olli-Pekka Kallasvuo had begun the packed press conference with by saying that Nokia had shipped over 200 million devices last year, equivalent to 380 camera equipped and 277 music-enabled devices every second.

He said the company had become more "more sensitive to the fact people want simplicity" before unveiling the 6220 Classic phone. Designed as a sharing device, the 5-megapixel camera supports geotagging since there's a built-in GPS.

Kallasvuo touched on Nokia's foray into in-car GPS trialling in California before unveiling the 2.4-inch screened Nokia 6210 Navigator. Then came the N series replacements. As well as the awesome looking, GPS, HSDPA and Wi-Fi-toting N96, Nokia also announced the N78, which as well as Wi-Fi and HSDPA also has an FM transmitter for in-car tuneage. There's also GPS for geotagging photos in both devices.

Nokia reckons it will ship 35 million GPS devices this year – not surprising since the Fins have decided to implement it in most of their high-end devices.

The boon, says Kallasvuo, will be terms of pedestrian navigation. He unveiled Nokia Maps 2.0. It still offers the 'Drive' feature, but adds satellite mapping and hybrid views. The real boon is the 'Walk' feature. "Think about how much easier it will make getting around in an unfamiliar city," said Kallasvuo. "This is really a revolution." No more struggling with messy maps, he says.

Maps 2.0 will be available for Series 60 phones immediately, with Series 40 support to follow.

"We believe it will become as desired on the mobile phone as voice capability," added Kallasvuo.

Nokia's final flourish was reserved for Ovi, its portal (for want of a better word) where you'll be able to upload and share almost anything. It will support over 100 file types and will emerge properly in the late spring. However Savander professed that Nokia has prioritised speed to market with the service, not necessarily perfecting it. "Is the experience good enough? That is the criteria".

"We are allowing people to take advantage of all the internet makes possible," added Savander. "We do have Ovi live internally now as a beta."

Music is already live in the UK and will be launched in other territories over the coming months. Maps will also roll into the service, which will also incorporate a social networking element and is designed to work with phones and computers through the use of Open APIs. Savander says that the service is purposely open, so that if a user prefers to use Flickr instead, they can.

"Openness is very much in the Nokia way of thinking. An open playing field where innovation can be offered…[there's the] opportunity for users to create the dashboard off their lives."