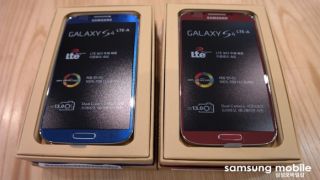 Crimson and cobalt come walking over

After a week in which Samsung formally unveiled more Galaxy S4 variants like the Galaxy S4 Zoom and Galaxy S4 Active, another iteration of the popular Android phone was uncovered.

We already knew Sammy was planning to release a version of the Galaxy S4 with 4G LTE-Advanced capabilities, but we didn't know when or if there would be any cosmetic changes to the handset.

While we still don't know which countries will get to take advantage of the high-powered phone, a new set of leaked photos gives us a better idea of what to expect from the Galaxy S4 with 4G LTE-A when it does finally arrive.

Korean site Naver happened to get its hands on what appears to be two versions of the upcoming smartphone, which bear a distinctly patriotic color scheme.

Dressed in crimson red and cobalt blue, the Galaxy S4 with 4G LTE-A certainly doesn't do anything to stand out from the crowd.

Even though the new handset will supposedly deliver speeds up to twice as fast as standard 4G LTE, that didn't stop Samsung from rolling out the same old blue we've been seeing adorn its phones for quite some time.

Though the red hue is a bit sharper, and does indeed pop a bit more, it's still a rather standard set of choices when compared to the more flamboyant aesthetics of the Xperia Z or the Lumia 920.

Unfortunately, Naver didn't provide any other details on what type of specs the latest Galaxy S4 included, or if they differed at all from the original.

It's been reported the 4G LTE-A version would feature a quad-core Qualcomm Snapdragon 800 processor, but that fact is still up in the air at this point.

The fact that a site was able to get its hands on what appears to be near-final versions of the smartphone does indicate we might not have to wait much longer to find out all the details.

It's curious though that Samsung didn't have the Galaxy S4 with 4G LTE-A at its Samsung Premiere event if it was so close to finished with the product, but perhaps the Korean manufacturer is waiting for the right moment to strike (or for cellular networks globally to catch up to the technology).

It certainly wouldn't be out of the question to see this new speedier phone debut alongside the oft-rumored Galaxy Note 3, which has been tipped for an August release.