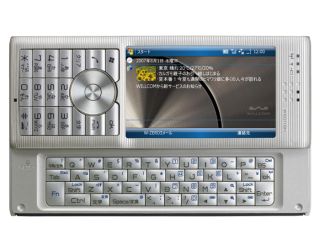 Never mind that hyped-up phone Apple is about to unleash , 29 June also sees the launch of the rather attractive smartphone you see in the photograph, which is about to become one of Japan's hottest gadgets.

The Advanced/W-Zero3 [es] , to give it its full name, is the latest iteration of a scorchingly successful series of home-grown smartphones made by Sharp and sold on the Willcom PHS network in Japan. The new addition raises the bar by offering several improvements.

Most obvious in the ¥30,000 (£124) device is a page-scrolling wheel controller in the centre of the keypad that Sharp has dubbed the Xcrawl and which is strikingly similar to the circular controller found on certain portable music players.

Also, a very welcome change is the redesign that makes the new Zero3 look less of a geek toy and more like the fancy phone it always could be. Previous generations were more than a little hard on the eye, although the newcomer is still pretty hefty at 157g.

Elsewhere, the same full hand of technology is present - standouts include, the 3-inch 480 x 800-pixel widescreen, Wi-Fi, Windows Mobile 6, USB host functionality and one of the most usable QWERTY keyboards to grace a smartphone. Internal memory is made up of 256MB of flash and 128MB of SDRAM as a work area, while the card slot is of the microSD variety. The camera is a little weak at just 1.3 megapixels.

Oddly lacking are Bluetooth and a silo for the stylus needed to operate the touchscreen - that has to hang limply on an attached strap. Willcom says adapters will soon be available to add Bluetooth, GPS and digital TV, but it would have been nice to see at least some included. Still, there's always next time and in rush-rush Japan that usually comes sooner than we think.