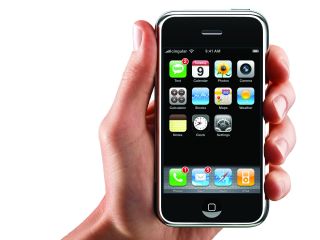 The Apple iPhone. Despite stealing the thunder from CES, Microsoft isn't worried, it seems

Microsoft executive Steve Ballmer has questioned the future of Apple's iPhone in an interview with US news service CNBC .

The Microsoft CEO balked when asked what his reaction was to Apple's announcement: "Five hundred dollars?! Fully Subsidised? With a plan? I said that is the most expensive phone in the world!"

He went on to say the iPhone would not succeed in business, stating that the lack of a physical keyboard would make it a bad choice for email.

Ballmer also reinforced Microsoft's confidence in its own approach to the mobile phone market, but was more diplomatic when it came to portable media players like Microsoft's Zune and the Apple iPod . Ballmer said he recognised Apple's dominance of the sector, but added: "Steve Jobs is going to have to keep up with an agenda that we're going to drive as well."

Microsoft has said elsewhere that it fully expects to sell 1 million Zune players between its US debut last November and next July. Those numbers may be helped by a European launch which could kick off in as little as two to three months . Apple said Tuesday that it had sold 21 million iPods in the last year.