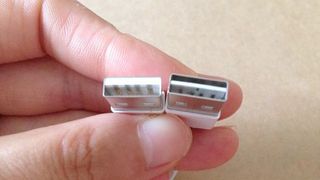 'I said upside down, you're turning me'

After leaking some snaps of it earlier this week, notorious (and generally reliable) Apple tipster Sonny Dickson has shown Apple's alleged reversible Lightning USB off in a brief video clip.

Fulfilling its main USP, the cable has no issue with being removed, flipped over and put back in. We also get a brief glimpse of a box at the beginning of the short, with the words "Lightning to USB Cable" written across it.

That may or may not be the box that Apple packages its new cable in - right now we could just be looking at a prototype. But given Dickson's track record of leaks, we're inclined to believe that this could be the cable that Apple with package with the iPhone 6.