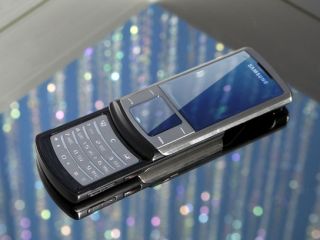 Although it was announced last week, Samsung's new Soul mobile phone has been given its first outing at Mobile World Congress.

Samsung likes to splash its cash, and it has taken every last available square inch of Barcelona advertising space to shout that it has 'Soul'. The trouble is, when you get to play around with one, the Soul isn’t actually that good. And it wasn’t so much the ban on photography at the Samsung stand that got to us as the Soul’s rather trashy interface.

One of the Soul's unique features is dubbed Magic Touch by DaCP. The Soul has a mini touchscreen with dynamic icons that change depending on what you’re doing. Listen to the music player, for example, and the icons change to play, stop, forward and back.

But rather than making the Soul effortless to use, the touch element feels like a gimmick. It ends up acting more as a keypad, rather than an absorbing take on a quick-launch user interface. However, Samsung disagrees. It says the touchscreen makes “navigation of the menus simple, intuitive and direct”. We’re not so sure.

You also have to hold the icons down for what seems like an eternity to get them to do anything – pretty frustrating when all you want to do is activate your web browser. Otherwise the device retains a similar Samsung Mobile experience to the company’s previous handsets. The build quality is excellent, while the handset boasts HSDPA support and a 5-megapixel camera.