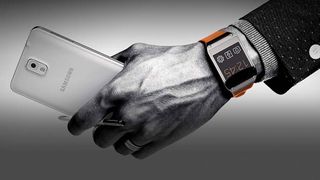 Gearing up to work with more phones

Eyebrows were raised when Samsung announced the Galaxy Gear smartwatch and revealed it would only initially work with the Galaxy Note 3 - luckily support for the Galaxy S4 is just weeks away.

The Korea Times has quoted Samsung vice president Lee Young-hee confirming that the company will roll out an upgrade for the Galaxy S4 in October, allowing it to work with the Galaxy Gear.

"All functions of the Gear will be connected to the Galaxy S4 smartphone by next month and the connection will be expanded to Galaxy Note 2 and Galaxy S3 by the end of December."

It's worth noting that the new Galaxy Note 10.1 2014 edition also plays nice with the Galaxy Gear smartwatch, but who wants to lug a tablet around with them all day?

The Galaxy Gear sports a titchy touchscreen display, 800MHz processor and even a 1.9MP camera - allowing you to check messages, make phone calls and snap pictures without having to remove your phone from your pocket.

Keep a look out for our full Samsung Galaxy Gear review which will be online soon.