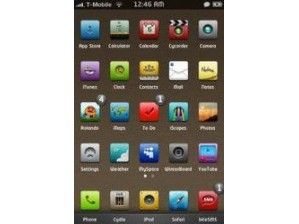 The iPhone with FIVE icons per column - swish

Hey you! Always thinking that the iPhone has too few icons for you to see in one go? Swiping too much of an issue for you? Then get yourself the Five Column Springboard!

The only downside is you have to have a jailbroken iPhone to do such a thing, so it's going to be more for the first gen iPhone owners, although some have managed to unlock the 3G version as well.

Developed by hacker Sakurina, it apparently works best with "nano-sized icon themes, like Abeo or Pump".

It uses the same icons you would normally see on your screen, but shrinks them into place, allowing more to be present.

And not only that, but if you get a hankering for the good ol' days of four icons, you just hit the springboard icon, wait ten to fifteen seconds for the phone to restart, and you're back the way life used to be.

It's only out in alpha version at the moment, so it should be safe according to Sakurina, but it does advise you use it at your own risk. Expect this App to be present on the likes of Installer.app in the near future as a full and finished product.