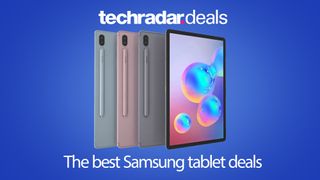 Android tablet enthusiasts around the world are keen to see the cheapest Samsung tablet prices and we're here to meet that need. The very best Samsung Galaxy Tab S tablets can be surprisingly expensive. That's where we come in though, with our price comparison technology working hard to find you the best prices from the most reliable retailers. We'll find you the latest offers for all of the still-available Samsung Galaxy Tab S family and the cheaper Tab A series too.

If you're after the latest Galaxy Tab S6 or S5e, you're in luck, as we've added the latest prices for Samsung's powerful slates to make sure you save as much money as possible. We'll walk you through various older models too so you can work out which one is best for you.

If you're looking for a wider variety of manufacturers, make sure you check out our cheap tablets page. And if you're interested in the rival Apple tablets, be sure to take a peek at our roundup of the the best iPad deals.

More power but at a higher price

The Samsung Galaxy Tab S6 really wants to replace your other devices, be it your laptop, or maybe even your iPad Pro. It comes with a feature-rich S Pen stylus that recharges in a super convenient magnetic groove on the back of the tablet when not in use. Dex mode works beautifully as a Chromebook-like operating system, although to get the most out of it, you'll need to fork out even more money on the BookCover keyboard (now featuring a touch pad too). Considering the steep price of the Galaxy Tab S6, Samsung would have won us over much more if the keyboard came as standard.

The battery should get you through a workday and we are impressed at how easily you can switch between work tasks or just kick back and enjoy the gorgeous screen and surprisingly loud speakers for media playback and web browsing too. If casual use is more your thing for a Samsung tablet, then we'd advise checking out the prices of the cheaper models below instead.

Arguably better than the S4 despite the lower price

The Galaxy Tab S5e isn't quite a full-on upgrade to the S4, instead, it has mix of improvements and minor cuts to bring the price down quite a lot. You're still getting the same gorgeous AMOLED screen and Dex connectivity as the more expensive S4. The Tab S5e is actually even thinner, lighter and includes a fingerprint scanner.

The processor is a touch slower in the S5e, but not by a huge margin. You don't get a stylus here either as the S5e's screen isn't compatible with any type of pen and it also lacks a traditional 3.5mm headphone port. If the lack of pen support isn't going to be an issue for you though, we'd go for this model over the more expensive Tab S4.

An update on an old favorite

The latest version of the cheapest 10-inch Samsung Tablet is a sleeker affair than past iterations and the price is pleasantly low too. The RAM is a bit low, but if you're not going to push anything too demanding on the tablet that wont be a problem.

If you just want a nice Full HD tablet to browse the web and watch film and TV content on then this is an excellent option and feels even better in the hand thanks to the new metal chassis that you'd expect to find on tablets costing far more than the asking price here.

Prices are dropping now on the former Samsung champ

The Samsung Galaxy S4 deals are looking better than ever now that the new flagship S6 has launched. The Tab S4 is a step up from the older tablets as Samsung has attempted to bring an optional desktop experience to the operating system to make it compete with Microsoft's professional-facing Surface devices. Sadly, this also means you'll have to buy the keyboard and mouse separately if you want the full Dex experience. The S Pen Stylus is included at no extra charge though. Truth be told, if you're not too bothered about the new desktop-modes, you could save a lot of money by opting for the older, but still excellent, Tab S3 model.

Samsung's 2017 still packs a mean punch and prices have dropped very nicely since then thanks to the newer models. With a glass back, it's clearly been taking style tips from the gorgeous Samsung Galaxy phone lineup and the new Super AMOLED screen supports HDR too - a tablet first at the time.

While still not what you'd call a cheap tablet by any stretch of the imagination, you can often save a lot of money with the S3 compared to the best prices of the newer Tabs. So take a look at the specs list for the two, and is this will do the job just as well, why not save a bit of cash?

With a stunning AMOLED screen to match many of Samsung's phones smartphones, this 9.7-inch Android tablet is still one we really like. It's super thin - thinner even than the iPad Air 2 - and is also super lightweight but very powerful.

The battery isn't the best if you're away from a powerpoint for the day though and the RAM is a little low compared to the newer versions, but if you're not going to be putting the Tab S2 through too many intensive apps, it should still be pretty slick. It's usually less than half the price of the newest Samsung tablet in the series though which is a huge selling point in of itself.

The smaller version of a Samsung classic

Prices for the 8-inch and 9.7-inch S2 frequently cross paths, making if difficult to recommend one over the other. One the one hand getting a bigger screen for less money sounds like the better deal, but maybe you'd prefer the smaller screen if you're on the move more or you find large tablets a bit unwieldy.

The battery on this version is smaller which is another element to consider. The screen resolution is the same, but the PPI (pixel per inch) density is greater on the smaller screen, so it looks just a tiny bit better.

One of the best small tablets still available

7-inch tablets are the ideal size for most people, offering a screen bigger than smartphones (although some are getting close to this size now!) but still being comfortable to hold in one hand while reading or watching video. The nonslip backing ensures it won't be sliding out of your hand either.

The 7-inch Galaxy Tab A is also a great size tablet to take with you out of the house on your commute or on your hols. And with a battery that lasts up to 11 hours between charges, you'll be doing just that as much as you want and be able to leave the charger at home if you're only out for a day or two.