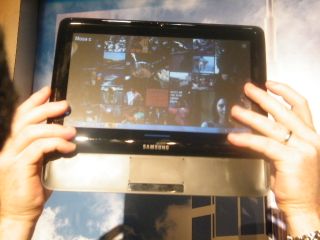 A Samsung spokesperson has confirmed that the Korean company will outline its tablet roadmap for 2011 at Mobile World Congress in February.

At CES, JK Shin, president of Samsung's mobile business, told journalists, "In February at MWC, we will unveil our next-generation tablet device portfolio in detail."

We wouldn't be at all surprised if the line-up includes a tablet running Android 3.0, Google's dedicated tablet Android OS.

Another inclusion will be a dual-core slate. Shin said, "In terms of dual-core applications, we already have a program, and next month at Mobile World Congress we will unveil it."

The same tablet could potentially be the successor to Samsung's first tablet, the Samsung Galaxy Tab, which was launched late last year.

Samsung has already revealed a tablet with a slide-out keyboard at CES this week – are there more ground-breaking designs in store? We'll bring you the news as it breaks in February.