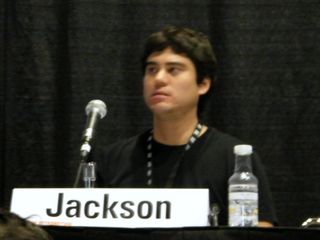 Jackson: "We don't want to lock people into Google products"

Google is keen that the usage of Buzz spreads beyond Gmail users and so it's actively looking at ways to achieve that.

One possibility is that either Google itself or third-party developers will release Buzz clients – in the same way that there are a multitude of clients for Twitter.

In an exclusive interview with TechRadar, Todd Jackson, Product Manager for Gmail and Google Buzz, said: "We think those kinds of opportunities are really interesting. We keep it pretty close to the chest in terms of what future products we are working on, but we want people who don't use Gmail to be able to use Buzz and so we're trying to address that.

"And we love the idea of third-party developers contributing to Buzz, so that's another thing that we are thinking about. There already are Buzz APIs available – they're currently read-only and we want to provide more full APIs and see an ecosystem."

In an earlier panel at SXSWi, Google Software Engineer Brett Slatkin explained his vision for Buzz, where you might have a WordPress blog that pushes comments into Buzz, and that posting to Buzz would push those comments back out to WordPress. We asked Jackson whether this was a project that is being developed.

"It is very early but we are actively working on these things," Jackson said. "We want Buzz to be interoperable with all these different communication products that aren't done by Google. And we want Buzz to be a leading example of some of these open APIs and open protocols.

"The way that we see it is that users want to use all these various different products. We don't want to lock them into Google products, but we want Google products to work really well and seamlessly with the other things they are using around the web."

Is Google urging Twitter, Facebook and Microsoft to think in the same way and open up their systems?

"That's certainly up to those companies," says Jackson. "We believe that open standards are the way to go because it creates the most value for users. For example, one of the things that Brett said was 'back in the day before SMTP email standards came about you could only chat within AOL or whatever other company was around' and that's sort of the way things are with social networks these days, so it's something that we would definitely like to see change."