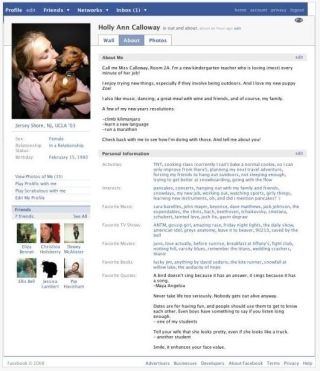 One of Facebook's new-look profile pages

Facebook has announced via its official blog that it will be giving member profile pages a bit of a spring clean in the next few months, with the introduction of a new-look profile page.

“We've realized that profiles have become cluttered and harder to navigate. We're trying to make profiles more simple and relevant, while still giving you control over how you express yourself,” writes Facebook’s ‘resident blogger’, Carolyn Abram, before inviting users to have a look at some sample profiles.

The new look profiles will be based upon tabs designed to enable users to easily switch between the most common features such as personal info, photos and wall posts. Users can add extra tabs and assign them to their favourite applications. From what we’ve seen it all looks fairly self-explanatory and could even make things easier to navigate.

However, we’re still not totally convinced by the official line that the redesign is being done for purely practical reasons. Call us cynics if you like, but that’s just the way we are.

In fact, in light of reports last week that visitor numbers fell for the first time in 17 months, we’re tempted to ask whether this could be seen as some form of admission by Facebook that the site is starting to go a bit stale. Not that anyone official would ever dare to admit as much, of course, but we certainly think that's the case.

Our evidence for this bold assertion? Simply ask anyone who’s had an account for over six months how often they log in now compared to when they first signed up. We all but guarantee that nine times out of ten the answer will be “not nearly as often”. Not all that scientific an approach, but there you go.

We’re not entirely sure if moving a few boxes around and adding some tabs is really the answer to this either. In fact, a quick straw poll around the office suggested that an official clampdown on the hordes of annoying, brainless applications and unwanted invites would prove a far more popular option.