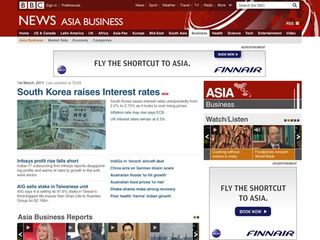 The BBC's international website has become profitable two years ahead of schedule, according to a blog post by Luke Bradley-Jones BBC.com and global iPlayer's MD.

Although UK citizens get the ad-free BBC.co.uk which is funded by the license fee, other countries get BBC news with added adverts.

The reputation of Auntie across the globe and, particularly, in the US, has made it a massively important news site, and the latest figures show that, by running adverts, it is also now making a profit, something that was not expected until 2013.

"Today, BBC.com has the largest international reach of any UK news website with comScore reporting 50m users outside of the UK," blogged Bradley-Jones.

"And, it's not just English speaking markets that love BBC.com: just last week the latest EMS survey that measures the media use of Europe's most affluent households confirmed that we're the most popular news website in Europe in that most sought-after demographic (again that's without including the UK).

"BBC.com also reaches a monthly audience of 21m in North America and over 10m users in Asia Pacific (making us the largest international news website in that key growth region).

"It's clear to see that even with with the proliferation of celebrity news and opinion online, the appetite for authoritative, impartial news and quality original lifestyle content is greater than ever."

The BBC is certainly one of the UK's most enduring brands, seen as trustworthy and without political agenda for news.

For the BBC.com site there has been active recruitment of local teams for key regions so that the global versus local feel is right.

"Over the past year we've launched a North American version and invested in a new team of journalists based in Washington DC, to curate the BBC's news output from over 2000 BBC journalists around the world and prioritise the content that is most relevant for US audiences, and to generate even more news stories that would be relevant to them," added Bradley-Jones.