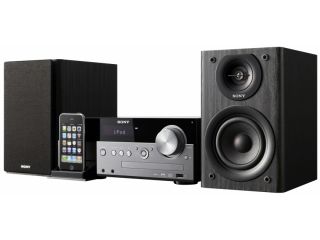 The best-looking of the lot is the MX550i. This HiFi system has taken its design cues from Sony's latest Bravia range of televisions, boasting monolithic features that are so good you'll be surprised there aren't a bunch of Neanderthals worshiping the device.

Alongside the design, is a two-way speaker system with 60W output and a hidden iPod dock. There's also DAB on board and a USB slot.

As this is a European-only product, it has been tuned by UK engineers for UK ears presumably – so Simply Red's remix of Sade will sound awesome on it.

Nestled underneath the MX550i in the range is the BX77DBi. Although the system doesn't boast a monolithic design, it does have an iPod dock, CD deck and will pump out 50w audio to soothe the ears.

For those who prefer the more traditional look, Sony has also announced the FX250 and FX350i Hi-Fi systems.

Again these have a USB slot, CD and DAB functionality. Both of these blast out a moderate 10W of sound and are only really different in their colours – the FX250 comes with brown speakers, the FX350i sports black ones. Oh, and the FX350i also houses an iPod dock, hence the 'i' suffix.

If an iPod speaker dock is all you are looking for, then you could do far worse than looking at the X80iP.

This setup can be used both in and outdoors, courtesy of the rechargeable battery housed in the device. Worthy for up to seven hours, you will be able to take X80iP into the great outdoors for a day without fear of it running out of juice.

Packed with 20w speaker and 20W output, there is also some powerful sound to be found within the X80iP.

Finally, there's now an iPod dock for the sc8r bois out there. The SK8iP – see what they did there? – is a dock for the teens and tweens of the world who like to accessorise.

Coming complete with four different 'skins' – ie fascias – the iPod dock can be given a personal look.

And to personalise it even more, you can log on to www.wrappz.com and make your own skin to use. As in 'skins' for the iPod dock and not in a Buffalo Bill / Silence of the Lambs sort of way.

Sound-wise, the SK8iP is for those who like it load, piping music at a 'can you please turn that down your mother is trying to sleep' 75W.

All of the Sony Hi-Fi kit listed has a UK release date of June, with pricing varying from £150 upwards.