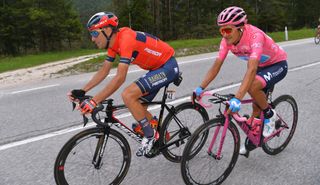 They've traversed the beautiful Italian countryside, cities and mountains and will be relieved to see the 2019 Giro d'Italia finishing line in sight. And none more so than Richard Carapaz. Discover whether the Ecuadorian can hold on to the pink jersey through to the finish of this year's race. With this guide, you can find out how to get a 2019 Giro d'Italia live stream from absolutely anywhere you are.

Giro d'Italia - where and when

If you intend to watch the Giro d'Italia from the comfort of your own home, you're in luck, it's being broadcast around the globe across various networks - keep reading to see where.

The action started back on Saturday, May 11 in Bologna and continued over 21 gruelling stages, concluding this Sunday, June 2 in Verona.

In its 102nd year, the Giro is still as tough as ever with a mighty 21 stages covering 3,518.5 kilometres in just 23 days of riding. If that doesn't make your knees ache to read, they will at the three time trials, the five high difficulty stages and the mighty summit finishes.

At the time of writing, the advantage remains with Carapaz of the Movistar Team, as he leads from Italy's very own Vincenzo Nibali and Slovenian Primoz Roglic. As far as surprises go, last year's narrowly defeated Simon Yates has been quite a way off the pace, and Tom Dumoulin has pulled out altogether after he injured his knee in a crash.

Last year saw the UK's Chris Froome win the Giro d'Italia with Dumoulin and Miguel Ángel López not far behind. It was Froome's climbing wins that set him in good stead for the overall victory after summiting both Zoncolan and the Jafferau as winner. The latter was stunning with a 3-minute lead win after an 80km solo lead.

So how can you enjoy all the tarmac-eating action? Read on to find out as we tell you the best options to live stream the Giro d'Italia. And the best bit is it's possible to do so absolutely free from some locations.

Get a Giro d'Italia live stream from outside your country

If you're desperate to watch every stage of the Giro d'Italia cycling but you're away from home and the coverage is geo-blocked, then you could always use a VPN to access it (assuming you're not breaching any broadcaster Ts&Cs, of course). You may be surprised how simple it is to do.

In short, a VPN allows you to change your IP address to another region. We've tested hundreds of VPNs and can recommend these as the three best VPNs currently available:

1. Express VPN (comes with a 30 day money back guarantee)
This is the #1 rated best VPN in the world right now. You can watch on many devices at once including Smart TVs, Fire TV Stick, PC, Mac, iPhone, Android phone, iPads, tablets etc. Check out Express VPN and get 15 months for the price of 12.
2. NordVPN: SmartPlay tech makes NordVPN a great choice for streaming.
3. IPVanish supports up to 10 devices, so great on the go

And they aren't just for watching sport from abroad - VPNs have become the go-to software for security, with their encrypted tunnels and zero logging. A lot of people use them for accessing foreign Netflix, too.

Bad news...that's only the case in Italy.

This year the Italian broadcaster Rai is going to share the Giro d'Italia event coverage in Italy for free. It's the only broadcaster we've found that's live streaming all the action without a subscription of some kind. And Rai also has an Android and Apple app for watching on your tablet or phone instead.

Yup, that means you can stream all the wheel spinning goodness on whatever device you're using, all on RaiSport +. The catch? Well, all the commentary will be in Italian of course! But below we've listed the major broadcasters in English speaking countries.

How to watch the Giro d'Italia: UK live stream

For UK residents the Giro d'Italia will get the Eurosport treatment. That means Eurosport 1, which is available in lots of broadcast and streaming forms, should make watching the racing simple. Eurosport is available with basic Sky TV packages or with a Eurosport Player monthly (£9.99) or annual pass (£39.99).

How to watch the Giro d'Italia: Australia live stream

This year all you lucky Australians will get the Eurosport coverage but only if you're a Foxtel subscriber. An HD package that includes sports, drama and entertainment should set you back about AU$58 per month on a one year contract.

How to watch the Giro d'Italia: US live stream

The Giro d'Italia 2019 will get coverage on good old Fubo.TV which means you can enjoy the cycling from multiple locations. Fubo is a sports focused streaming TV solution that lets you subscribe for what you want and stop when you're done – ideal for this event.

Since this is app powered and delivered over the internet, you can watch it on lots of different devices. including smartphones, tablets, Smart TVs and streaming boxes. That means wherever you are you shouldn't miss the action.

How to watch the Giro d'Italia: Canada live stream

Canadians will be able to get in on the Giro d'Italia 2019 action much in the same way as their US neighbours can. That means Fubo.TV access in Canada where the events will be streamed to whatever device you're using. Simples.