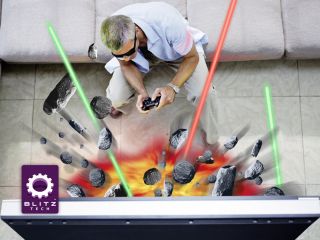 EA boss warns of poorly-authored 3D games that might give you headaches like you've never experienced before!

EA boss John Riccitiello has talked about the coming Nintendo 3DS and the future of 3D games in the build up to gaming show E3.

Riccitiello has to be careful about exactly what he says in the week prior to E3, the videogame industry's major annual trade event, at which all the latest hardware developments are unveiled and major AAA-game announcements are made.

That said, Riccitiello has been talking about his expectations for the growth of 3D gaming this week, in addition to noting that he has seen the new Nintendo 3DS handheld and that he is at least able to confirm that it is 'cool'.

But what of the other big new tech announcements due to be made in LA next week?

In terms of EA's expectations for the growth of 3D gaming, Riccitiello notes that the installed base of 3D TVs and 3D-ready PCs and gaming laptops will, "come over the course of the next two to three years in large numbers.

"Samsung and Sony are certainly putting a lot of weight behind that and you'll see that play itself out. I don't think it's going to be a big story this year for games; some particular titles are going to play it out."

Saying that, the EA boss is still "a little nervous that some game companies will put out poorly authored 3D content, sort of just put it together, because look, all games, most nearly all games are 3D already.

"It doesn't take that much to separate, you know, two and a half inches and sort of redraw the entire frame and have it run through any of the various polarization or the primary blinking system between the right and left eye.

"It's quite a different thing to author it in such a way that the "Z-dimension," the third dimension, is really well done. When it's not really well done, it's a new kind of headache that you haven't ever experienced."

As far as EA's plans and big announcements for E3 2010, Riccitiello adds that: "Medal of Honor, is coming back so strong. In many ways, I feel like we invented the sector with Medal of Honor. Steven Spielberg invented it.

"Steven's the guy that originally designed the game with us. It's a great franchise. We spent three years reworking this one and it's going to be big and people are going to really like what they see and I'm sure you've seen the trailers and things for it. I think that's going to be very important.

"And Dead Space 2 is more than a worthy sequel; it's going to be a monster. So I'm really, really pleased with that. It's got some really innovative online gameplay and... frankly, what made our lead character so interesting to begin with.

"It seems like everyone's been Duke Nukem since the beginning of time, you know? Give me a bigger gun and I'll march my way through. I think that that's the way people have been building Bond games and most FPS games. What Dead Space does is it's a thinking man's game in addition to being a great action adventure title."