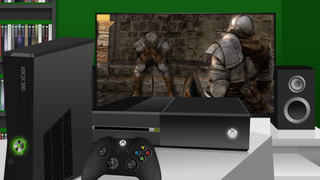 It is the best of times and the worst of times to be an Xbox 360 gamer.

As one of the most successful consoles of all-time quietly enters its twilight years, people still waiting for a price drop or a birthday or the death of a wealthy relative before they commit to buying an Xbox One are still enjoying some excellent new releases.

Games like Titanfall, Telltale's episodic series The Wolf Among Us and South Park: Stick of Truth all rank highly, to be sure.

But one game in particular is probably most likely to procure the title of the last gen console's last great hurrah, and that's Dark Souls II.

"One game is likely to earn the title of the Xbox 360's last great hurrah, and that's Dark Souls II."

The original Dark Souls is easily one of my favourite games of all time. I don't think any other game even comes close in terms of sheer hours I've spent away from my controller, comparing my experiences to those of other players and simply devouring the more elusive elements of Lordran's lore.

Not all of my 40-60 hours spent actually playing the game were pleasant, but they were certainly memorable.

The times I spent repeatedly trying to best characters like Havel the Rock probably felt more akin to bashing my head up against a brick wall than spending a relaxing afternoon gaming.

And yet, I wouldn't change a single thing about it. Which is why, perhaps, I'm so touchy about a few of the changes they're making to Dark Souls II.

First off, there's definitely more of an emphasis on the player vs player elements touched upon in the first game, which, admittedly, I didn't spend nearly as much time on as I probably should have.

"We wanted to, I guess not necessarily enhance the PvP alone; we want to encourage or enhance the covenant system," said Namco producer Takeshi Miyazoe when I caught up with him at an event in London a few weeks ago (full interview here).

"What that means is, we wanted to get players to really take on their role within the world, and we wanted the covenants to help them to do that."

Black Armour Edition: Yesterday publisher Namco Bandai announced that players who pre-order the game will receive a voucher for the Black Armour Weapons Pack of shields and weapons. These items may make adventuring a little bit smoother, especially in earlier levels. So what you waiting for?

Covenants, in case you aren't familiar, are the somewhat obscure guilds that players can pledge their allegiance to within the game world, and each his its own distinct members benefits.

Some affected the story, whilst others made PvP more challenging.

"The goal of Dark Souls II is not just to play the game from start to end, but to live on in the Dark Souls universe"

So why more emphasis on PvP this time around? "The goal of [Dark Souls II] is not just to play from start to end, but to sort of live in the Dark Souls universe, to continue on after you've finished the story," Miyazoe continued. "To live in the world, and really take on the role of influencing other players who are facing the same difficulties in the game."

Now, ignore the thought of a Dark Souls-style MMO that that sentence inevitably puts in your head, and think about how rad DSII is likely to be based on that description alone. Yup.

That said, a few of Dark Souls II's new inclusions genuinely surprised and, I admit, worried me just a little bit.

I've gone into a little more detail on these worries elsewhere, but it's been interesting to see the internet's reaction to these changes.

In Dark Souls, you could encounter other players; they could invade your world and fight you or you could summon friendlies to help you, but you couldn't communicate using 'normal' means.

And there was something quite lovely and elegant and in keeping with the tone of the game about having another player greet you with a bow instead of a curt greeting over voice chat.

In Dark Souls II, players can voice chat. And yes, they also have the option to turn it off if they want to; I just hope that the very inclusion of voice chat doesn't discourage them from using soapstones or other more rudimentary means of communication.