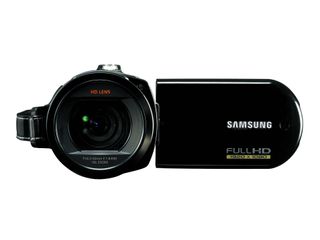 Samsung's SC-HMX20C was one of the big winners

Both Samsung and Sony are celebrating today after picking up multiple honours in the CES 2009 Best of Innovation Honorees awards.

Samsung's Full HD camcorder, the SC-HMX20C was noted as a "multifunctional device highlighted by a visually stunning design".

While the TL9, a compact camera with built-in MP3 player and the HZ10W, the world's first compact digital camera with a 24mm ultra-wide angle, 10x optical zoom, get a mention.

Finally, the TL34HD camera, with its "revolutionary touch-screen interface" was also seen as standout.

Sony, meanwhile, were praised, camera-wise, for the Alpha DLSR-A900, the world's highest resolution DSLR, and the hi-def shooting Cyber-shot T500.

When it comes to camcorders, the company was also garnered a warm reception for its HDR-CX12 Handycam and the HDR-TG1, an ultra-portable, high performance Full HD camcorder.

CES, which begins in January next year, is one of the world's biggest consumer electronics shows in the world. TechRadar will be in attendance, so that you don't miss a thing.